The premium small SUV sector has a new challenger in the form of the Volvo XC40. We’ve driven it for the first time

The stakes are high for Volvo with the XC40, but the good news is that on the basis of this early drive, it has judged its new baby extremely well. It’s not the last word in driver involvement but then, neither are any of its rivals. And while purists may scoff, it’s hard to think of anything else in the class that offers the same mix of clever packaging, uncluttered interior design, cruising comfort and refinement, as well as great connectivity. We’re very keen to try a lower-powered D3 diesel, but for the time being, this feels every bit of what a small premium SUV should be.

Volvo is on a roll at the moment, reaping the rewards of patient but heavy investment in new chassis and fresh engines through its XC90 and XC60 SUVs, as well as the S90 saloon and V90 estate.

The next phase in the Swedish brand’s recovery from near-obscurity starts here, though - with the XC40. And Auto Express has been behind the wheel of the new small SUV challenger to see if Volvo’s success can continue.

The XC40 is clearly a Volvo, although the design language is more edgy and youthful than the fairly mature XC60 and XC90. It’s a little bit longer in body and wheelbase than Jaguar’s newly launched E-Pace, and a teeny bit taller with it - very much an SUV, not a crossover. Perhaps more significantly for Volvo, the new arrival’s wheelbase is a full 10cm longer than that of an Audi Q3. 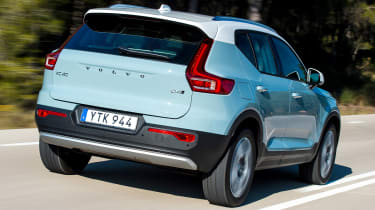 The greatest significance of the XC40 arguably lies beneath it - because while the ’60’ and ’90’ models we’ve seen already use the same kit of chassis components, called SPA (Scalable Platform Architecture), the new arrival is the first Volvo to use a smaller, cheaper set of parts, called CMA (Compact Modular Architecture).

And while SPA has always been designed with premium products in mind, CMA has been jointly engineered by Volvo and its Chinese owner, Geely – so it has to offer value to buyers in Asia as well as standing up to premium rivals everywhere else.

At some point in 2018, the XC40 range will include a plug-in hybrid edition and a pure-electric version. But at launch it’s available with just conventional motors. The D3 is a four-cylinder turbodiesel producing 148bhp; it’s available with a six-speed manual or eight-speed automatic gearbox, and with either front or all-wheel drive. The other diesel option is badged D4; it’s a more potent unit, with 188bhp and 400Nm of torque, and you can only order it with the eight-speed auto and four-wheel drive.

There are three petrols - the 154bhp three-cylinder T3, which is front-drive and manual only, and the T4 (188bhp) and T5 (247bhp), which stick with all-wheel drive and the auto. 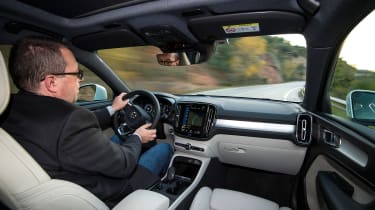 The diesels look reasonably efficient, with a front-drive D3 manual on 18-inch alloys emitting just 127g/km of CO2, for a BIK rate of 27 per cent. Even the all-wheel-drive (and automatic) D4 we’re driving here manages as little as 131g/km, for BIK of 29 per cent. That’s a couple of points below the comparable Jaguar’s figure.

R-Design takes the Momentum spec and adds leather seats, the auto-folding side mirrors, a different design of diamond-cut alloy wheel, gloss-black trim, tinted windows and leather on the steering wheel and gear knob. Then R-Design Pro throws in the heated front seats and adaptive headlights again, but also beefs up the looks with 20-inch alloys and brings further comfort with power adjustment on the driver’s seat.

Inscription is the top level, with ambient lighting, a powered tailgate, metallic paint, front parking sensors, and a matt-silver finish on the front and rear skid plates. But even here you’ll need the Pro trim for the extra goodies. Doing so gives you 19-inch wheels and LED front fog lights. 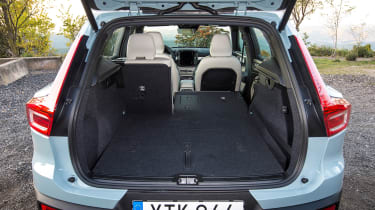 The cheapest XC40 starts at £28,750 for a FWD T3 Momentum manual, while an all-wheel-drive automatic D4 diesel will set you back £31,700. By comparison, a D150 AWD version of Jaguar’s recently launched E-Pace costs just £100 more – although while the British car’s range extends to almost £49,000, Volvo is packing the XC40 models much more closely together. We can discard the limited-run First Edition, but even a fully loaded D4 Inscription Pro weighs in at just £36,600.

Volvo’s finance computer is still being fed all the required data to get monthly numbers, but we’re told a D3 Momentum should cost you around £50 per month less than an Audi Q3 Sport 2.0 TDI quattro auto, on similar terms over a four-year deal.

The D4 unit has more than enough shove for a car of the XC40’s size and weight, and it actually feels pretty brisk. The engine does its best work between 1,500rpm and 3,000rpm, and the eight-speed auto is keen to shift up just before the higher of those figures. It’s nicely judged, really, because that’s also the point where the motor really identifies itself as a diesel, through a harsher note and increased volume.

At a cruise there’s little to complain about engine-wise, but we did notice a fair bit of road roar from our car’s optional 19-inch rubber, and some wind noise from around the A-pillar and side mirrors. Our car also had the gearshift paddles, which will only be an option on R-Design models in the UK. 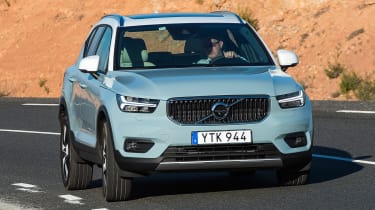 The box isn’t that quick to respond to them anyway, but it’s worth noting that the alternative for ‘manual control’ is an oddball left-right configuration on the stubby gear selector; you push it towards the passenger to shift up, and pull it towards you to change down. Suffice it to say that it’s one of the least satisfying gearshift layouts we’ve yet encountered, to the point where you’d likely never use it.

Even on those optional wheels, at high speeds the XC40 does a good job of soaking up road imperfections. You’ll occasionally notice a slight floating effect, but it never strays to the point of making you seasick. Its trickiest moments come at low speeds around town, where you might find the car troubled by deep potholes. Then again, we’d expect a standard Momentum on 18-inchers to demonstrate a bit more compliance in this regard.

All ‘new-era’ Volvos have scored pretty strongly on infotainment - and since the XC40 offers basically the same system as its bigger stablemates, it looks particularly strong for its class. The portrait-format system, with its ‘collapsible blinds’ interface, takes a little bit of getting used to, but it’s quick to navigate once you get the hang of things and the screen in crystal clear. It’s also able to transfer key information, such as sat-nav instructions, across to the fully digital instrument panel that’s standard across the range.

The only fly in the ointment here is smartphone integration, because while Android Auto and Apple CarPlay are available, they’re a £300 option. That’s pretty stingy when this level of connectivity is standard on many mid-range superminis. 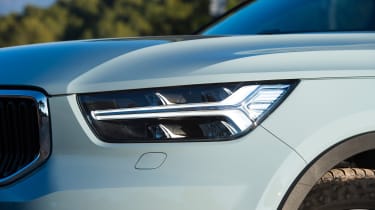 The rest of the cabin is neat, functional and, in its own way, very Swedish. If you’re a die-hard fan of soft-touch fabrics then you’ll probably judge it a disappointment, but the rest of us should find the XC40’s interior a pretty special place to spend time. The facia has relatively few switches, and a clean, uncluttered look. Depending on the trim you choose, there’ll be a vibrant flock lining in the enormous door bins to offer a dash of funky colour.

There are plenty of simple, clever touches, too. You’ll find a folding hook integrated into the glovebox that is designed to help you make it home without spilling a drop of your chicken chow mein. The rather flimsy-looking lidded compartment between the front seats turns out to be a removable, washable bin, too. There’s also the option of a wireless phone charging pad and USB port at the base of the centre console.

That longer wheelbase helps with rear legroom - although the amount of headroom for back-seat passengers is equally impressive, even with the optional panoramic sunroof fitted. There’s plenty of room on board for four grown-ups, although a fifth adult may complain about the high transmission tunnel.

Others in the class may claim a larger boot capacity than the Volvo’s 460 litres, but the XC40 has a commendably flat load bay, with no lip at the front edge. It stays that way even if you lower the rear seats, too, increasing the space on offer to 1,336 litres. Spec the Convenience Pack and you’ll get a folding boot floor that can divide the space and stop your shopping from rolling around. The hinges even stand proud of the top edge of the resulting divider, giving you a few extra points from which to hang shopping bags.

A winning package, then? We reckon so - but with one major caveat. The car we’ve tried mixes the D4 engine with Momentum trim - and that’s not a combination that will actually be offered to British customers. You’ll need to step back to D3 power to access the entry spec which, we suspect, could have the most composed ride quality for the UK’s poor roads. Will that trade-off bring any compromises of its own? We’ll have to wait and see.