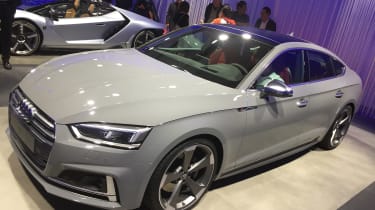 Audi has begun taking orders for its new A5 and S5 Sportback, as well as the latest two-door coupe. Starting from £38,005, it goes on sale just a month after its Paris Motor Show debut.

That base price is a whopping £7,305 more than the cheapest A5 Coupe, but that's because pricing for entry level SE versions of the four-door have yet to be announced. For now, that gets you a 187bhp 2.0 TDI diesel in quattro Sport trim which spec-for-spec is exactly the same price as the Coupe.

The new five-door coupe versions haven't changed much from the standard A5 coupe, but these new cars have a hatchback instead of a saloon-like boot opening. The side-on shape is much curvier than the A4 saloon on which it's based, with a swooping profile, rising shoulderline and wider wheelarches.

Frameless doors also set the A5 Sportback apart but look straight-on at the rear end and you'd struggle to tell it apart from the two-door A5. The S5 performance version's more muscular styling is again carried over from the 2-door A5. The Sportback also retains the hatchback bootlid of the outgoing car, giving it a practicality advantage over the coupe and A4 saloon.

The A5 Sportback body itself is only fractionally longer and wider than the A4, but it's 41mm lower and has a wider track. The wheelbase is 2,824mm, around 4mm longer than the A4, so Audi is claiming considerably better accomodation for front and rear seat passengers plus a 480-litre boot. Despite that, it weighs as much as 85kg less. 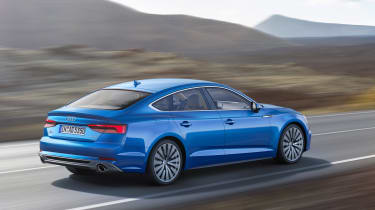 Inside, as expected, the front cabin is entirely identical to that of the A5, with the same virtual cockpit digital instruments and central MMI infotainment screen. It also retains the same level of driver assist equipment. In the back, there's three seatbelts so the A5 is, in theory at least, a five-seater. Expect headroom to be reduced by the sloping roofline, however.

The familiar range of four and six-cylinder diesel and petrols transfer over to the Sportback, with a choice of six-speed manual and seven or eight-speed auto gearboxes. The range kicks off with a 188bhp 2.0-litre TFSI petrol, while 2.0-litre and 3.0-litre diesels are also available in various power outputs from 187bhp to 282bhp. Fuel economy figures have yet to be announced, however.

The S5 uses the same 3.0-litre V6 turbo petrol with 349bhp, firing the Sportback from 0-62mph in 4.7 seconds, which is the same as the coupe. The S5 is quattro-only, while the rest of the Sportback range is front-wheel drive with quattro four-wheel drive as an option.

What do you think of Audi's new four-door coupe? Leave us a comment below...