Long wheelbase boosts versatility, and i20 is one of the roomiest superminis on sale 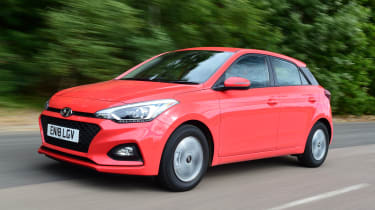 As the i20 has significantly grown in size over the outgoing model, it’s no surprise the second-generation supermini is one of the most practical and spacious in its class.

It’s longer, lower and wider than before, with 45mm added to the wheelbase. There’s plenty of room in the rear and there’s only a small hump in the middle of the floor, so while it’s a slight squeeze with three adults in the back, it’s still above average for cars in this class.

The i20 was the first car in the class to feature a full-length panoramic glass roof. It's standard on top-spec Premium SE models, and while it does slightly encroach on headroom, this model still rivals the Ford Fiesta for head space.

Inside there are trinket trays in the doors, and large bins that can hold a large bottle. A tray in front of the gear lever is large enough for a smartphone, and there’s two big cup-holders beside the handbrake. Some models get a lidded bin that doubles as an armrest and the glove box is reasonably sized. Overall, the i20 is on par with its competitors when it comes to stowage solutions.

The Hyundai Mk2 is 4,035mm long and has a 2,570mm wheelbase. This makes it one of the largest superminis in the market, while a width of 1,734mm creates plenty of interior room, and a roof height of 1,474mm boosts headroom.

The i20 is roomy in the rear, and even taller adults should have enough knee room to the seat in front, which is impressive given the boot space on offer. However, the i20’s tapering roof line means there's less headroom than in some rivals. There’s adequate space, but taller passengers might find it tighter than in a Volkswagen Polo, for example. Width across the rear bench is good, though. 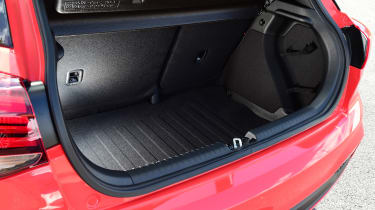 The 301-litre boot is huge and one of the the biggest in the class. A false floor can be removed and stowed away to further increase space and the standard 60:40 split rear bench folds flat, freeing up 1,042 litres of space.