We asked you what your favourite car design is for 2017, and the Jaguar I-Pace Concept has taken the crown 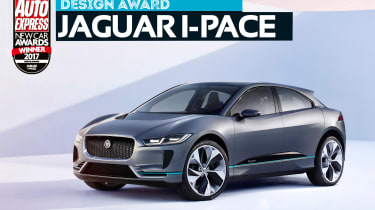 The Auto Express Design Award is decided by you, our readers, via a poll on our website – and now the votes have been counted we can reveal that the car you consider the most stylish to be unveiled over the past 12 months is Jaguar’s all-electric concept, the I-Pace.

It beat some seriously tough competition to win, which is extremely encouraging for the British brand as it prepares to launch its first pure EV.

The I-Pace is a radical design departure for Jag, but keeps just enough DNA to display its heritage, with cues from the F-Type sports car and F-Pace SUV.

The all-electric powertrain is a first for the firm, and allowed designers to take a fresh set of ideas and create a brand new look. It’s a little smaller than the F-Pace, at 4,680mm long and 1,890mm wide, but there’s a much longer wheelbase that creates the distinctive ‘cab-forward’ look.

Those aggressive headlights and the huge grille are inspired by 2010’s C-X75 supercar concept, and the deep front bumper vents, big alloys and sculpted sides give it a sporty stance befitting of any Jaguar.

It’s not just the exterior that you love about the I-Pace; the interior is another revolutionary step for Jag. Three screens and touch-sensitive buttons with haptic feedback cover the dash, delivering a mix of digital and analogue. It’s still at the concept stage for now, but these aspects will certainly inspire the production car we’ll see towards the end of 2018.

This EV should deliver rock-bottom running costs, with a claimed range of 310 miles on a single charge, and an 80 per cent top-up taking just 90 minutes via a rapid charger. Plus, the twin electric motors deliver 395bhp and 700Nm of torque instantly, which should be enough for 0-60mph in around four seconds.

We’ll have to wait and see how well the newcomer fares when we drive it, but for now there’s no doubt the look of the I-Pace has won over car fans everywhere.