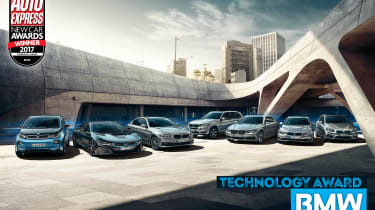 The pace of technology has ramped up yet another notch in 2017. As manufacturers place a greater emphasis than ever on hi-tech powertrains and cutting-edge features in new cars, this year it’s BMW that wins this category, showing a window to the future with its all-conquering technological revolution in the field of plug-in hybrids.

When it comes to electrified cars, the German brand is one of the innovators, offering the most convincing execution of battery-supported plug-in models across the whole spectrum of the car market.

The hybrid i8 supercar looks the part, and drives like its supercar styling suggests, sprinting from 0-62mph in 4.4 seconds. Its powertrain was ahead of its time when the car launched in 2014, and meant you didn’t have to sacrifice economy for performance, as the car’s official 134.5mpg betters just about anything on the road.

However, it’s the lessons the company has clearly learned from the i8, and carried over to its more modern models, that have impressed us this year.

The i3, Europe’s first premium compact electric car, has benefited from a recent facelift, and among the improvements is a greater range. Plus, plug-in hybrid tech has also been launched on BMW’s core models this year to great success, with the economical 3, 5 and 7 Series PHEVs providing a genuine alternative to the diesel norm.

But the electric car range is far from the only string to BMW’s technology bow. The brand has also invested heavily in driverless tech, launching the latest 5 Series with a semi-autonomous driving system and the ability to park itself without anyone at the wheel.

BMW is futureproofing its line-up, working together with tech giants Intel and Mobileye, and investing heavily in mapping company HERE to develop fully automated cars that are slated for production in 2021.

There are also innovations in convenience and comfort tech. Gesture control has appeared in top-spec models, while the new 5 Series was the first car anywhere to support wireless connection for Apple CarPlay.

Some variants have automatic gearboxes that use sat-nav data to choose the appropriate ratio for the road ahead, too. Furthermore, BMW’s ‘Smart Key’ has a 2.2-inch touchscreen and wirelessly charges as you drive, while the new 5 Series even lets you check the 360-degree parking cameras via a smartphone app.