The BMW 5 Series is the 2017 Auto Express Executive Car of the Year, with the Mercedes E-Class and Tesla Model S commended 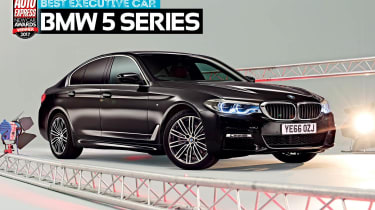 Things move quickly in the executive market. The all-new 5 Series has reclaimed its crown as the class champ thanks to its winning blend of style, refinement and technology.

Based on a new platform, the BMW adopts much of the technology from the larger and more expensive 7 Series, but packages it into a cheaper proposition, while offering a much more involving drive at the same time.

Among the 5 Series’ talents are a new auto parking system that allows the saloon to be moved in and out of tight spaces using an optional digital key fob. A new Driving Assistant Plus pack also lets the car accelerate, brake and steer itself on the motorway at speeds of up to 130mph. It will even change lanes and overtake, proving just how advanced this BMW is.

Refinement has also taken a leap forward with the latest model, with a range of smooth engines and a supremely cosseting ride. Go for adaptive dampers and the breadth of ability is widened further still, offering a supple, flowing ride in Comfort mode.

The 5 Series retains its excellent driving dynamics. Ramp the dampers up to Sport and the sharp turn-in, strong body control and impressive grip make this a sporting executive saloon. The new platform has helped trim around 100kg from the seventh-generation model, which goes some way into making it one of the most nimble and engaging executive cars on sale. 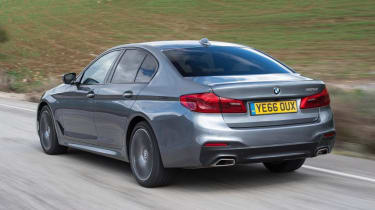 Four and six-cylinder petrol and diesel engines are available, while xDrive four-wheel drive is offered on selected models. All cars get an eight-speed gearbox, which changes smoothly in auto and snaps through ratios quickly in manual mode. Allied to the 187bhp 2.0-litre diesel, the powertrain serves up decent performance, excellent refinement and impressive running costs, with a claimed 68.8mpg. The BMW doesn’t skimp on luxury, either, with a full leather interior, sat-nav and digital instruments as standard.

Only SE and M Sport trims are offered in the 5 Series line-up; racier M Sport models bring a beefier bodykit and extra equipment, but cost a further £3,020. So it’s the entry-level SE version we’d go for, as this gets the same impressive and intuitive infotainment system, a digital dash and just as much comfort, agility and quality. The 2.0 diesel engine also offers the best balance of performance and economy. 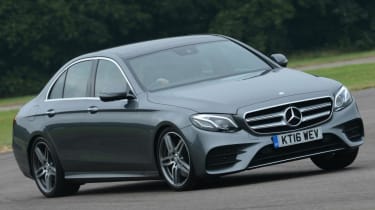 If a sophisticated driving experience and plenty of luxury is what you’re after then the Mercedes E-Class has it in spades. It lacks the 5 Series’ overall engagement and excitement, but makes up for it with a beautifully crafted cabin, impressive digital displays and air suspension, even if they’re optional extras. 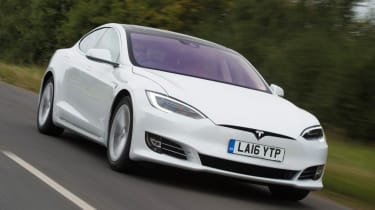 Tesla’s assault on the mainstream manufacturers continues as subtle updates to the Model S make it a genuine alternative in the executive class. It might be on the pricey side and quality leaves a little to be desired in some areas, but nothing else like it offers such a mix of astonishing performance and rock-bottom running costs. This is a genuinely viable executive EV.