Occupants sit lower down and closer to the MX-5’s centre line for maximum enjoyment, while there’s more technology than before

The MX-5’s design is more about perfect proportions than endless slashes, creases and vents in the bodywork. Mazda’s designers have worked hard to introduce a more muscular and squat stance on the road, making the car 10mm lower overall with a 15mm shorter wheelbase and overhangs reduced by 45mm at each end.

Slim LED headlights and a gaping front grille give it a slightly more aggressive character than previous versions, while round tail-lamps provide a striking light signature in the dark. Whether the roof is up or down, the MX-5 has a classic silhouette, with the cockpit located towards the rear of the car and a long bonnet stretching out in front.

By adapting the standard MX-5’s design to accommodate the hard roof on the RF, Mazda has created something really rather unique in this sector. Unlike the Mk3 MX-5 RC, the RF has buttresses that slope down from the back of the cabin and into the slightly kicked up rear wheelarches. The result is something discernibly different from its soft-top relative, despite sharing the same sharp-looking front end design. This is definitely part of the RF’s appeal, but you’ll have to really like the looks, as the intricate roof arrangement has added another £2,000 to the car’s price tag when compared with the standard car. 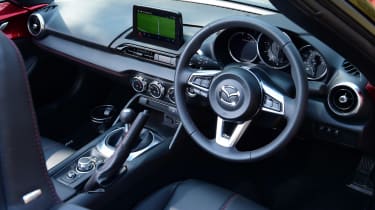 Whichever model you go for, on the inside, the door tops are coloured to match the exterior paint, adding a flash of colour to the cabin and, according to Mazda, visually connecting the driver to what’s going on outside. They are also sculpted in such a way that airflow with the hood down is directed to keep the passengers cool while minimising buffeting to their hairstyles.

On all models, the dash is dominated by an iPad-like screen, controlled through a rotary dial on the centre console. Underneath that there are three circular dials for the climate control. The instrument panel (with the tachometer front and centre) and air vents are designed to be perfectly symmetrical around the driver, for a cockpit-style feel.

The seats have been moved 15mm closer to the centre line of the car and 20mm lower in the chassis, putting you closer to the Mazda’s centre of gravity. Apart from a few questionable plastics here and there, and the simplicity of its design, the MX-5 cabin is a pleasant place to be.

The options list is pared back, just like the whole of the MX-5 package. There’s a choice of six mica and metallic paints. We think the MX-5 looks great in Soul Red, but if you don’t want to spend any money on paint at all, your Mazda roadster will come in Arctic White, which looks just as smart.

All MX-5 models come with a seven-inch touchscreen infotainment system that features sat-nav, Apple Carplay and Android Auto as standard. DAB radio also features, along with a six-speaker sound system that’s replaced by a nine-speaker Bose version in Sport models and above. Bluetooth connectivity and internet app integration is also included as standard, while higher-spec Sport Tech and GT Sport Tech models get a reversing camera too.

The MX-5’s infotainment system is also found on other Mazda models and is fairly intuitive to use, especially via the rotary control on the centre console. It’s not the most exciting in graphical terms but gets the job done.