It’s no grand tourer, but the Mazda MX-5 is quite spacious considering its modest dimensions

While the MX-5 will never be a family car, Mazda has definitely made the most of its modest dimensions.

The lightweight fabric hood can be folded back easily from the driver’s seat with one hand. Small cubbies between the seats and on the centre console are useful for your phone or small change, but there’s no glovebox, while the car's 12v socket is tucked away under the dash in front of the passenger seat.

A bonnet lowered by 28mm over the previous car’s, plus thinner A-pillars moved back by 70mm, mean forward visibility has been improved significantly. But what really makes the MX-5 surprisingly practical is its light steering feel, soft suspension and impressive refinement with the roof up in top gear.

The RF's roof can be raised or lowered in 13 seconds, at up to 6mph. However, the clever top reduces boot space by three litres over the standard convertible, to 127 litres. The hard-top doesn’t dampen wind noise any more than the canvas-roofed MX-5, so the RF is still noisy. There is some turbulence, despite a wind deflector.

It all adds up to a car that you could easily use every day, unless you need to carry large, bulky items on a regular basis.

The Mazda MX-5 is compact at less than four metres long (3,915mm), just 1,735mm wide including the door mirrors and 1,225mm high (1,230mm with the 2.0-litre’s 17-inch wheels). The overhangs are shorter than before and the wheelbase is trimmed to 2,310mm, which requires inventive packaging within, yet also provides the squared-off stance of the MX-5.

Now that the seats have been moved closer together, with two six-foot adults on board the driver will occasionally brush their passenger’s thigh inadvertently when changing gear. But otherwise, the MX-5 is very comfy inside for a small car.

Head room stands at 950mm, there’s over a metre of leg room (1,096mm), and you get 1,325mm of shoulder room and 1,320mm of hip room across the cabin. While it’s nothing like as spacious as any of the premium German opposition, for something markedly cheaper than those vehicles it still feels an appealing, premium product. There’s very little storage inside, and not even a glovebox, while the door bins are small. The cabin is cramped, with the RF offering marginally less headroom than the soft-top. 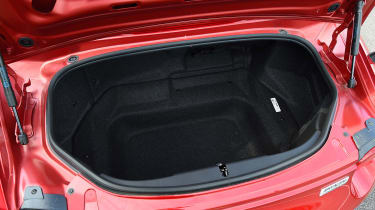 Boot space is reduced over the old model by 20 litres to 130 litres overall, but cleverly the load area has been reshaped so that it can swallow two carry-on suitcases – something that the old model could not achieve. The boot opening is 821mm above the ground, while the fabric hood stows away in a slot behind the rollover hoops, so it doesn’t eat into the limited luggage capacity.