It's safer and slinkier than a 3-Series, but can Volvo's newcomer deliver similar driving thrills? 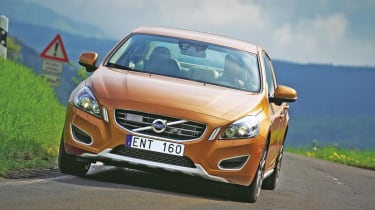 Volvo’s image is on the up – and the S60 is the car that proves it. From the flowing exterior lines, to the surprisingly sporty handling it marks a significant step forward for the traditionally straight-laced Swedish firm. But the S60 hasn’t lost touch with Volvo’s core values. Despite an unfortunate malfunction during a demonstration on the press launch, it’s auto brake system which can now detect pedestrians as well as other cars on the road, is streets ahead of its German competitiors.

The S60 is bringing sexy back! Volvo’s slinky new 3-Series rival has landed and Auto Express has driven it first.

Tasked with adding a dash of desirability and sportiness to the range, one glance at the swoopy styling confirms the S60’s landmark status in the Volvo line-up. The newcomer swaps the boxy lines normally associated with the Swedish manufacturer and features an Audi A5-apeing crease, running from headlights to taillights, that bends and flows around the wheel arches.

Its aggressive front treatment is carried over from the facelifted C30 and C70 and adds to the impression of a four-door coupe rather than a traditional saloon. And despite measuring in at a three centimetres longer than its predecessor, short overhangs give it a compact and muscular stance. But has the sporty styling been translated into an engaging drive?

Our test car was fitted with a 202bhp 2.4-litre D5 diesel, although a newly developed five-cylinder 161bhp 2.0-litre D3 unit and a range-topping 300bhp 3.0-litre T6 petrol with four-wheel drive are also available. The D5 is as smooth, quiet and punchy as we’ve become accustomed to, with a soothing five-cylinder thrum on full throttle. Excellent insulation, slim A-pillars and supple suspension boost refinement and make the car a superb long-distance companion.

The pleasant surprise is that the S60 sets a new dynamic benchmark for the firm. Our only major gripe is the overly light steering, but what it lacks in feel it makes up for in directness – small inputs produce instant responses. Specify the active chassis software for £1,125 and you can choose between three settings for the suspension, too. Overall it feels closer in character to the Audi A4 than the more athletic BMW 3-Series, but it’s certainly a step-forward.

When it comes to cutting edge safety technology, the Swede has the Germans stumped. The latest addition to Volvo’s raft of accident prevention gadgets is Pedestrian Detection with Full Auto Brake. Available as an option, it uses radar in the car’s grille and a camera in front of the rear-view mirror to sense a pedestrian crossing or about to cross the road and applies full braking force if the driver fails to react.

The S60 is by no means perfect, but in terms of style, safety equipment and driving dynamics it breaks new ground for Volvo and provides them with a worthy challenger to the established players from Germany.

Rival: Audi A4 The handsome A4 holds its own dynamically with the BMW 3-Series and Mercedes C-Class. There’s a wide range of efficient petrol and diesel engines too. The cabin is the best in the class, while strong residuals and low CO2 emissions make it a solid choice for private and fleet buyers alike.