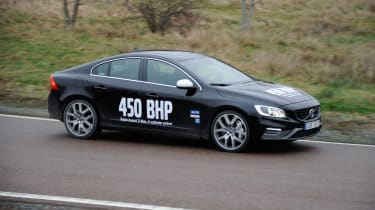 We only got behind the wheel of a one-off prototype that isn’t representative of a final production car powered by this unique engine, but the initial signs are good. There’s loads of useable power and if Volvo works on matching the gear ratios with it, the engine delivers mighty turbo-lag-free performance that would work in every driving situation. A range of hot Volvos sporting this fiery engine could be arriving in the next few years – and we can’t wait.

Can’t find the cash to stump up £50k for the ultra-exclusive Volvo V60 Polestar? Don’t worry as the Swedish firm is busy developing a highly powerful engine that could slip into a hot Volvo in the near future – and Auto Express has been one of the first magazines in the world to try out the potent power unit.

The clever Swedes have created a triple-turbocharged 2.0-litre four-cylinder engine that produces a whopping 450bhp. Volvo paid a lot of interest to Mercedes’ A45 AMG launched last year and in particular to its 355bhp 2.0-litre four-pot.

The Swedes have also eyed-up the Volkswagen Group’s brags of building 2.0-litre engines capable of producing dizzying power outputs of up to 415bhp. But Volvo has reacted by trumping the Germans in one fell swoop by building a 2.0-litre unit with 450bhp and 550Nm of torque because, in the words of its president of powertrains, ‘it can’. 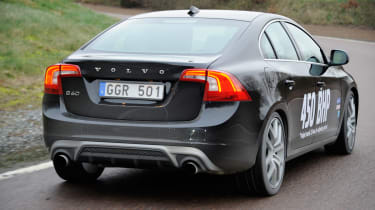 The company’s engineers have taken one of Volvo’s new Drive-E engines and added a third electrically-powered turbo to the engine’s two parallel turbochargers. It’s the addition of that third turbo which gives Volvo the right to say the engine will deliver supercar-busting performance from such a tiny displacement. The compressed air from this third turbo isn’t sent to the cylinders but spools up the other two instead.

With all that power, the petrol needs to get to the cylinders more quickly so there’s a pump forcing the fuel through at 250 bar while a whole load of other oily bits have been upgraded too to help the engine deliver its gut-wrenching 450 horses.

A heavily modified S60 Saloon was the mule showcasing the new engine and a few laps of Volvo’s factory test track in Gothenburg showed there’s great potential for the engine. Volvo’s proud words of this engine having no turbo lag isn’t PR fluff, as that third-turbo helps eradicate that feeling of no power at the lower-end of the rev range.

Prod the throttle and the 450bhp arrives early on – the torque from the electrically-powered ‘E-boost’ turbo stops at 3,300rpm, and from here on it the two conventional turbos show their muscle. There’s a constant feeling of acceleration and the power delivery is delightfully progressive, and it’s all backed up by a Haldex 5 all-wheel-drive system, which helps fire the car up the Tarmac. 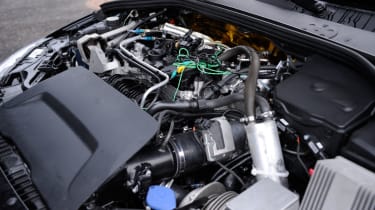 Despite this, however, our drive didn’t deliver the sense of that gut-wrenching speed we were hoping for. While the engine is very responsive to the throttle and chirps away like a 1980s Group B rally car, the car was let down by a sluggish eight-speed automatic gearbox. Volvo says it has no intention of following the current trend of developing nine- and 10-speed automatic gearboxes, admitting it feels its eight-speed example is more than sufficient.

Our S60 mule was slow to respond to gear changes in manual mode and when left in auto, didn’t have the correct gear when we needed it. However, the car was just a prototype and wasn’t a finished example of how a hot Volvo saloon would perform.

Which is just as well really because the car handled like all performance Volvos have in the past – and that’s a bit stodgy. Turn into a bend and the steering lacks any type of communication while the brakes were a tad too spongy for our liking. The experience wasn’t helped with our S60 having several Polestar modifications including a loud exhaust system that boomed its four-cylinder soundtrack straight into the cabin. 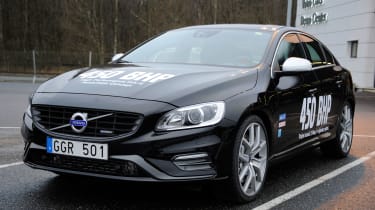 But these criticisms are of the test mule and not the engine. The big advantages of using a 2.0-litre unit are that it’s light. Volvo’s traditional method of powering a racy model is with a heavy five- or six-cylinder lump, but the four-pot is a featherweight in comparison and that makes its point known when you’re sticking the car into a corner. Nose-on understeer was minimal even on slimy Swedish Tarmac in December.

The other big gain is efficiency. While economy figures haven’t been calculated yet, you can be certain this 450bhp powerhouse will be kinder to your wallet that old hot Volvos have been in the past.

The company’s senior vice president for R&D, Peter Mertens, told Auto Express that while no plans have been set to build the engine, he admitted that it would be a pity if it didn’t. “This engine would be a nice solution to the next Polestar engine,” he said.