Not many models on the road carry the same weight of expectation as the BMW M3. 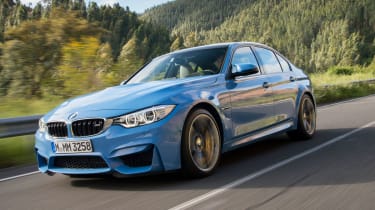 Not many models on the road carry the same weight of expectation as the BMW M3. Each and every model has managed to gain iconic status among car enthusiasts, so this brand new model had quite a lot to prove.

A new turbocharged 3.0-litre straight-six engine is in to replace the old car’s naturally aspirated V8, and thankfully it’s just as good - it delivers the sort of searing performance you’d expect.

There’s a slightly different character here, with massive reserves of mid-range torque rather than top-end power, but it remains a seriously impressive performance car. One minor criticism is the synthesized engine noise played in to the cabin. Yet while it doesn’t sound entirely natural, its booming roar gets your attention.

What really sets this M3 apart is just how comfortable it is. With the suspension in its softest setting, this car doesn’t feel too much stiffer than a run-of-the-mill 3 Series. But when you find a nice set of corners, the M3 comes alive; everything feels immediately responsive and there’s plenty of grip from the front end. In the best ‘M’ tradition, there’s plenty of scope for big, tyre-smoking drifts, too.And if the four-door saloon body isn’t for you, then there’s also a sleek M4 coupe model on sale, too.