From its beefy bodykit and bassy exhaust note to its dash-mounted boost gauge and incredible grip, the Abarth doesn’t disappoint. It’s one of the most fun and characterful cars money can buy at the moment. 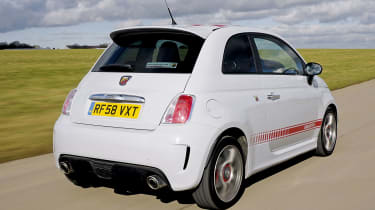 While the Abarth name is well known to fans of Italian classics, it means nothing to a whole generation of car buyers. That’s why the new 500 needs to make a big impression. This point hasn’t been lost on the designers, as the car instantly turns heads – even without the optional decals on our model. Its aggressive front bumper, bulging sills and twin exhausts leave you in no doubt about its intentions. Critics will argue that the Abarth is over the top, but no one can say it lacks road presence. In comparison, the Mitsubishi appears plain.

Using the excellent Fiat 500 as a base, the Abarth’s cabin was always going to be distinctive. Body-hugging sports seats and black rooflining create a moody atmosphere, while the boost gauge on the dashboard, flat-bottomed steering wheel and red stitching are just what you expect from a proper hot hatch.

So is its rumbling exhaust note. Start the 1.4-litre turbo, and bystanders could be forgiven for thinking it delivers more than 135bhp. If that doesn’t bring a smile to your face, driving the car for a few hundred metres will. The chunky gearshift, snug seating position and retro dials create a racy impression, while the responsive engine delivers lively performance. Although the Colt is faster, from a standing start and on the move, the Abarth does 0-60mph in 8.1 seconds – excellent for a hot city car. It’s incredibly nimble in town, where the well weighted steering and firm suspension combine to make the 500 feel supremely agile.

It can’t match the Ralliart Colt for pace, but has the measure of its rival when it comes to grip – turn into a corner too fast, and the Mitsubishi’s front wheels will run out of traction first. The Abarth is just as impressive exiting tight bends. Its electronic Torque Transfer Control (TTC) system combines with a linear power delivery to rein in wheelspin.The regular 500 comes with a City mode, but the Abarth version features a Sport mode instead. Press a button and the throttle settings are sharpened, the steering becomes heavier and torque increases to 206Nm.

We like the more urgent responses, although the steering feels heavy and artificial. The ride is predictably firm, and the 500 struggles to retain its composure on uneven roads. Still, superior damping makes for more solid and cushioned progress than in the Colt. While the Abarth is 223mm shorter, it seems bigger from behind the wheel. The styling won’t suit every taste, but you can’t fault the effort that has been put into making the 500 look and feel special.

Chart position: 1WHY: This is the most eagerly awaited model from the reborn Abarth brand. So, is the hot 500 worthy of the scorpion badge?