Some people thought Rover's Streetwise was a daft idea, but obviously not Citroen. The French firm has always been a fan of quirky concepts, and the Rover's moon buggy looks went down so well in Paris that it decided to create its own version of the chunky 'urban on-roader'. 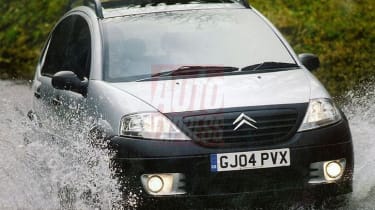 On the surface, the C3 XTR would appear to be a cosmetic exercise, with the only under-skin change being the introduction of a new 1.4-litre petrol engine. However, with so much extra equipment as standard, it's a more practical offering than other models in the range. A well executed idea that proves that the 'urban on-roader' could well be here to stay.

Some people thought Rover's Streetwise was a daft idea, but obviously not Citroen. The French firm has always been a fan of quirky concepts, and the Rover's moon buggy looks went down so well in Paris that it decided to create its own version of the chunky 'urban on-roader'.

Based on the UK's fourth best selling supermini, the C3, the XTR is tougher looking and better equipped than its conventional siblings. The black plastic bumpers, grille, wheelarch extensions and sills help make it look like a baby off-roader, although its chunkiness is only skin deep, as it's mechanically unchanged from the standard C3. While the cosmetic changes may not appeal to everyone, they do offer a more practical solution to the scuffs and scrapes that city cars have to endure.

Another practical enhancement is a pair of clever roof rails. Each rail contains an aluminium section that can be mounted transversely to allow bikes or skis to be carried. Inside, the XTR has a durable new seat fabric, and rear passengers benefit from tray tables in the backs of the front seats. Both front and rear occupants can enjoy the full- length panoramic sunroof, and Citroen has also fitted its Moduboard boot divider as standard too.

Two engine variants are on offer; the 1.4 HDi diesel, which comes coupled to a manual gearbox, and - as fitted to our test car - the new 1.4i 16v petrol unit. Power delivery is refined until the very top of the rev range, when it starts to feel a bit strained. However, brisk progress can be made without stretching the engine, and although the SensoDrive clutchless gearbox could do with slightly swifter changes, it is smooth.

In all other respects the XTR drives much like any other C3. The car goes where you point it, but the variable power-steering is a relatively feedback-free experience. The ride is firm, which should offer decent body control, but when the corners arrive, the car leans far more than the unwary might expect.

However, there's no problem slowing down for the bends, as the ABS brakes are excellent. And the safety equipment doesn't stop there as the XTR comes with four airbags and automatic central locking when you are on the move - a welcome feature for the city driver, despite those rugged looks...