How to rebuild a carburettor zenith 36IV

Successfully rebuilding this simple but effective unit can restore power over its Weber alternative, as Gary Stretton explains 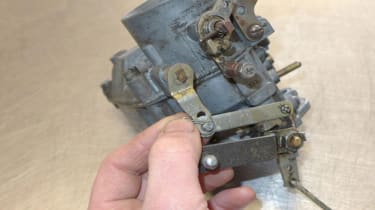 The Zenith 36IV carburettor has been out of original manufacture for some years, although new copies are available. The copies have aroused much debate as to their quality and, similarly, so has the value and effectiveness of trying to rebuild an original carb using a widely available overhaul kit. The 36IV divides owners, creating much opinion expressed in online forums, but no firm conclusions appear to have been reached. Many owners opt to fit a Weber 34ICH carburettor instead which, when compared to the Zenith, offers restricted gas flow with better fuel economy, though with reduced power. Having read and heard many differing opinions on the 36IV when used in a 2.25-litre 109 Station Wagon, I chose to rebuild one that I bought for a mere £5.

The key reason these carbs can frustrate owners is due to poor engine running, even after a full rebuild. So was I wasting more time, or is the 36IV

simply misunderstood? I strongly suggest attempting this rebuild at a time when your Land Rover is not in regular use, just in case additional parts are required. It’s also important to buy a good quality rebuild kit from a reputable source (check www.zenithcarb.co.uk). In order to check and repair any warping of the emulsion tube, it’s essential to use a sheet of glass or other known true surface. 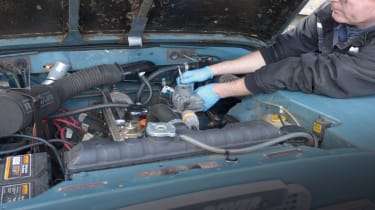 Check the spindles and their carb body holes for excessive wear. A carb specialist can ream in new bushes to save scrapping the carb. I used paint thinners and old toothbrushes to clean the carb’s internals and body. Avoid liquid gasket sealants when reassembling. The guide shows the key areas of concern when attempting such a rebuild.

• Take your time with the rebuild and always work from dirty to clean • Take photos and make notes as you strip the carb • Do not throw anything away until your vehicle is running • If you don’t have access to compressed air, a high output camping or bicycle pump with inflatable mattress adaptors can be used instead