The MX-5's revvy Skyactiv-G engines are a joy, but we'd go the extra power of the 2.0-litre

Driving feel is what the MX-5 is all about – it has built its reputation on serving up playful dynamics at an affordable price, and the latest version doesn’t disappoint.

With a kerbweight of between 975kg and 1,000kg depending on spec, the Mk4 is over 100kg lighter than the model it replaces, and only 50kg heavier than the original, launched more than 25 years ago. That means performance is strong, even with the relatively low-powered 130bhp 1.5-litre version.

The engine revs eagerly all the way to 7,500rpm, so the driver is rewarded for holding on to a gear and powering out of a corner. However, it really does need to be worked to get the best out of it, so you’ll be changing gear a lot to keep the engine in its sweet spot. Luckily the six-speed box is about as good as manuals get, with a beautiful mechanical feeling and a short-throw shift action. 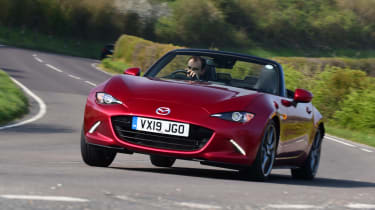 Switch the traction control off and you can break the rear tyres’ grip on the road, but the car always lets you know how close to the limit you are.

The suspension is supple, so the body rolls in bends, but that only adds to the sense of interaction between driver and car when you’re moving fast, and boosts comfort when you’re taking things easy. The steering is light but pinpoint accurate, while the stubby gearlever pops satisfyingly from gear to gear.

The MX-5 was built around the 1.5-litre engine – and on a twisty road, you can tell as it lets you safely explore its limits. On a route where you can rev the engine out, the 1.5-litre is an absolute joy. However, if you need to overtake more frequently or prefer more mid-range punch, there’s the 2.0-litre engine.

The 2.0 car is slightly heavier than the 1.5, but only by 25kg. The added weight is in the nose and as a result the 2.0-litre doesn’t feel quite as quick to turn in, even though it's been given a strut brace to keep the suspension tied together (on higher models).

All 2.0-litre models have a limited-slip differential, which helps improve traction out of corners. And with the stability control turned off on a track, this makes it a bit easier to get the tail out. The 2.0-litre also has bigger brakes, which deliver better stopping power, while Sport Tech and GT Sport Tech versions benefit from sports suspension with Bilstein dampers and a front strut brace. These reduce body roll and aid turn-in, but there’s a mild trade-off in ride comfort. When combined, these upgrades make the 2.0-litre Sport Tech and GT Sport Tech feel like a mini Porsche Boxster. 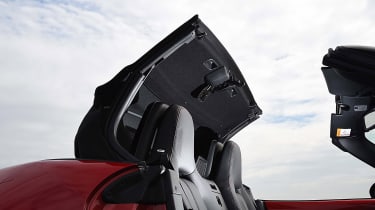 Although it’s quicker, more planted and arguably better equipped for track use, the 2.0-litre is actually no more fun to drive than the rev-happy and softer-sprung 1.5-litre model. Still, overall, the fact the 2.0-litre is as fun as the 1.5 – and easier to live with – means it would be our choice.

In the RF, even with the sportier Bilstein dampers and a strengthening strut brace fitted to the upper models as standard, the chassis is softer compared with a Toyota GT86, with more roll in corners. There’s plenty of grip available, though, while the steering is nicely weighted and geared at just the right speed for the damping set-up. It makes the RF a fun and cohesive package, and with the 2.0-litre model’s limited-slip diff, the MX-5’s chassis offers just enough adjustability to change the car’s cornering line with the throttle. You can trim it with a lift or even a gentle brush of the brakes.

The MX-5 RF's softer damping means its ride is more forgiving than the Toyota GT86's for more of the time. However, it still crashes over bigger bumps, with rough roads deflecting the car off your chosen trajectory. With the roof up, the RF feels relatively solid; fold it down and the chassis vibrates and wobbles slightly like the soft-top. The RF’s extra 40kg over the standard car isn’t noticeable on the road, though.

The 2.0-litre SkyActiv-G unit has slightly more accessible and larger reserves of power and torque (181bhp at 7,500rpm and 205Nm at 4,000rpm), but isn’t quite as charismatic or ideally suited to the featherweight MX-5 as the 1.5; the 130bhp engine definitely sounds better, with a harder-edged note under full acceleration.

Both units have a dual-overhead-camshaft configuration with a high compression ratio. This is one of the main ways that Mazda can claim good fuel economy figures from normally aspirated engines.

While the RF's design gives the car another dimension visually, luckily it doesn’t do much to the way the MX-5 drives. When we tested the earlier, pre-2018 158bhp 2.0-litre six-speed manual model it sprinted from 0-60mph in 6.8 seconds, and despite a 39bhp deficit to the Toyota GT86, the Mazda is 202kg lighter, at 1,045kg in total, so it was also faster in gear, accelerating between 50-70mph in fifth in 6.4 seconds – four tenths quicker than the GT86. It also had the Toyota covered between 30-50mph in fourth, completing the test in 4.7 seconds – six tenths quicker than the GT86.