Mazda doesn’t use turbos to boost efficiency, but still claims impressive economy figures for the MX-5

Mazda claims it prefers not to focus on achieving spectacular results in the official EU economy cycle; instead, it says it’s more interested in giving customers real-world fuel savings.

That’s why its strategy is based around high-compression naturally aspirated petrol engines rather than following the turbocharged, downsizing trend. Both the engines offered in the MX-5 use direct injection technology, but the smaller 1.5-litre SkyActiv unit delivers better economy – it returns 44.8mpg with CO2 emissions of 142g/km.

The 2.0-litre comes with Mazda’s i-stop and E-Loop fuel-saving technology, giving the engine figures of 40.9mpg and 155g/km.

Despite its exotic shape, the MX-5 should be no more expensive to run than, say, a Mazda 3 hatchback – both use a variety of common components, so replacement parts should be easy to track down and relatively affordable. 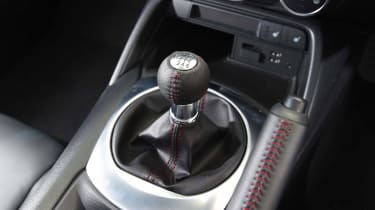 If you’re planning to wait for a more powerful turbocharged MX-5 or a more efficient diesel version, don’t hold your breath – Mazda’s engineers have ruled out both, in the near future at least.

Despite our changeable weather, the UK is one of the largest markets for convertibles in Europe – so it follows that the MX-5 should hold its value well. Experts predict the two-seater roadster should retain around 47% of its original value over 3 years and 36,000 miles.