The new Porsche Cayman GT4 is one of the best performance car bargains of the last decade. It contains a lot of 911 GT3 technology and know-how, is powered by a fantastic new 4.0-litre flat six engine, and to drive, it is close to perfection. And all for a mere £75 grand. Right now it is in a class of one, and it’s hard to see that changing any time soon.

According to Porsche the new £75,348, 414bhp Cayman GT4 is “a brutal driving machine that is perfectly irrational.” It’s also a car that is “razor sharp in its responses that’s been designed for people who take their fun seriously and who would rather sit in a sport seat than a leather armchair.”

That’s the reason it has a six-speed manual gearbox, like it or not (although a PDK version will be offered next year), plus an enormous rear wing at the back that helps generate 122kg of downforce - a full 50 per cent more than the previous GT4, despite a near-identical drag figure.

There’s also a serious looking diffuser underneath that “demands respect” – whatever that might mean – while GT3 technology has been employed extensively not just for the mid-engined chassis but throughout the pared back interior as well. Reading between the lines, what we are talking about here is a thinly disguised racing car that’s been fine tuned for more than just occasional use on the road. The ride, says Porsche, is significantly more comfortable than before, and having driven it Auto Express concurs. 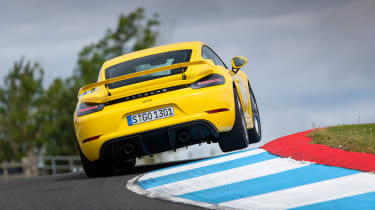 At the GT4’s heart, sitting amidships behind the two sports seats (full buckets are optional for £3,788) is a 4.0-litre atmospheric flat-six engine that produces 414bhp and revs to an ear-piercing 8,000rpm. Maximum torque of 420Nm is actually the same as before but is developed over a much broader rev range between 5,000-6,800rpm. The engine is a development of the new 992’s 3.0-lite flat-six turbo motor but has been bored out to be fully 1.0-litre bigger in capacity and is not turbocharged. In other words, it has nothing to do with the engine from a GT3.

The new Cayman GT4 weighs a touch more than of old, Porsche admits through gritted teeth, the kerb-weight having risen by around 35kg to 1,495kg due mainly to the fitment of new particulate filters in the huge new rear silencer that will allow it to be emissions friendly for many years to come. Even so, the latest GT4 is still potent enough to hit 62mph in a mere 4.4s and has a top speed of 188mph.

Around a track, however, it is significantly faster than the old car due to a combination of that increase in overall power, yet further refinement of the GT3-influenced chassis and the fitment of even gripper Michelin Pilot Sport Cup 2 tyres. The GT4 has lapped the Nurburgring in a faintly astonishing 7min 28sec, which is the exact same time posted by the 997 GT3 RS 4.0-litre not so long ago.

Subjectively the GT4 is one of those cars that feels right, feels perfect even, from the moment you climb aboard. The sports seats clamp you in place behind a round steering wheel that’s swathed in Alcantara suede and positioned absolutely where you want it to be, even though it adjusts manually in all directions. And on the move it gets better still.

The star of the show is unquestionably the new 4.0-lire flat-six engine, which sounds loud-ish on start-up but only reveals its true genius when you rev it beyond 5,000rpm. The throttle response up at those revs is absolutely fantastic, and the extra feeling of torque in the mid-range is obvious the first time you put your foot down at anything above 3,500rpm. But it’s only over the final 2,000rpm that the real magic starts to happen, at which point the acceleration takes on another level and the sound that accompanies it becomes magnificent.

This is a proper Porsche GT-car engine in both feel and delivery, and it combines with the frankly brilliant six-speed gearbox – which features a useful auto-blip function on downshifts – to make for a quite giddy driving experience to begin with. It’s easy to get very carried away, very quickly in the GT4, and that’s before you’ve so much as aimed it at a corner. 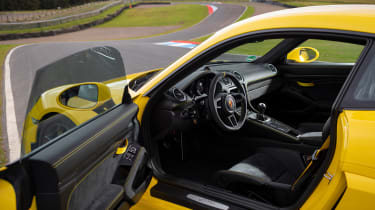 At which point things get better still. The precision of the turn in and the steering response in general is breath-taking, the body control virtually faultless, even around a tight and twisty circuit such as Knockhill up in Scotland, where we drove the car. And as for the brakes, as ever with Porsche GT cars they are superb in both feel and power. There’s quite a lot of grip available, too, so much so that the GT4 is not a car that slides easily, even if you switch its various driver aids off.

It’s hardly the surprising that the GT4 is as quick as Porsche claims it is around the Nurburgring. For 75 grand it is, genuinely, one of the biggest performance car bargains of the last decade.