The Renault 5 is back! 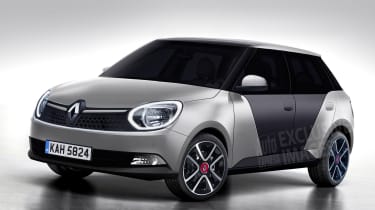 Renault is working on a spiritual successor to the legendary Renault 5, built between 1972 and 1996. Conceived as a whole new type of supermini to sit alongside the Clio, the newcomer uses cost-effective underpinnings, but features a hi-tech interior.

Deep in the bowels of Renault’s innovations centre near Paris, Auto Express was shown a prototype of the Value Up concept, but wasn’t allowed to take pictures. However, our exclusive images show how the concept uses a quirky two-tone colour scheme, short overhangs and Renault 5-inspired proportions to blend the old with the new. 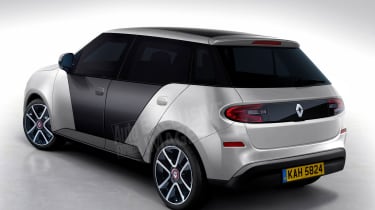 Devised by Renault’s LCI think-tank (a crack team of 40 designers, engineers and researchers tasked with finding, and building, future mobility solutions), the Value Up concept is designed to cost roughly the same as the current Clio, but by using a new cost-effective ‘A-entry’ platform and low-powered engines, it frees up manufacturing costs to be spent on a hi-tech interior.

As it weighs only 830kg, it should be economical, and early projections suggest a version with a 1.0-litre three-cylinder engine would emit less than 100g/km of CO2, while a possible plug-in hybrid model would emit 45g/km and claim about 134mpg. Both would use an efficient robotised manual box, as in Citroen’s C4 Cactus.

Measuring around 3.8m in length, the Value Up concept is larger than a Twingo but smaller than a Clio. However, there are full-width bench seats in the front and back to create a laid-back atmosphere. 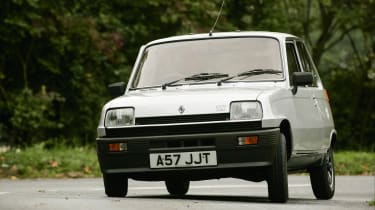 Natural materials are used throughout on the concept, including wood door trims and bamboo to strengthen the front crash structure, although these are unlikely to make production.

The real breakthrough, though, is the fully digital dash design, including two seven-inch LCD screens – one replacing the instrument cluster and one to the left of the steering wheel. The rest of the dash is replaced by two enormous widescreen 15.9-inch LCD displays. These sit side by side: one in the centre of the dash and one directly in front of the passenger.

They’re fully interactive, so that any of the controls – from the air-con to switches for adjusting the wing mirrors – can be activated anywhere on the screens. A tablet can be used to control all the functions, too, or to watch a video separately in the back.

According to Solen Kerleroux, an electronics engineer who worked on the new interior, the technology works perfectly, can be integrated with Apple CarPlay and Android Auto, and could be seen on a production car within two to three years if the green light was given now.

In terms of exterior design, the proportions bear a striking resemblance to those of the Renault 5, with short overhangs front and rear, a bluff nose and front and rear screens sloping in towards the centre line of the car. The Value Up concept has a five-door layout with blacked-out A, B and C-pillars to create a MINI-style floating roof.

According to LCI director Gilles Lallement, while the 282mpg EOLAB concept seen at last year’s Paris Motor Show was all about the very latest tech innovations, the Value Up is about applying ideas and offering solutions to trends towards urbanisation, female drivers and younger customers. 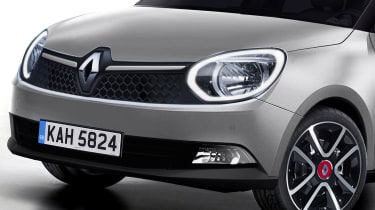 But the bad news is the Value Up is an internal prototype, with Renault not planning to reveal it, in its current form at least, at any international motor shows. However, Serge Mouangue, LCI’s head of product strategy, has said certain design elements could filter down into a variety of future production cars, and hasn’t ruled out a showroom version in years to come.

“This is just a prototype now, a laboratory, and it won’t be produced as it is,” Mouangue explained. “But we will present the car internally to the public, and see what they say and how they react, then use these comments in a future vehicle.”

Would you like to see a new incarnation of the Renault 5 joining Renault's range? What should the car be like? Let us know in the comments section below...