The Volkswagen T-Cross compact SUV is now available with a 1.6-litre four-cylinder diesel engine, priced from £21,240 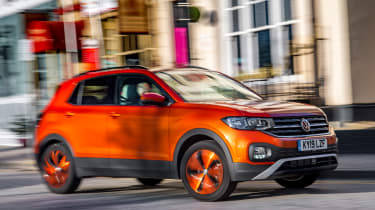 The recently-launched Volkswagen T-Cross can now be specced with a 1.6 TDI diesel engine. Prices start at £21,240 for the SE specification model, climbing to £26,740 for the range-topping automatic R-Line variant. Unlike the petrol-powered T-Cross, the new diesel option is not available in base-spec ‘S’ trim.

Volkswagen’s new turbocharged 1.6-litre four-cylinder diesel produces 94bhp and 250Nm of torque in the T-Cross. Buyers can choose from either a five-speed manual or a seven-speed automatic gearbox, with the latter commanding a £1,500 premium over the former. 0–62mph times for the two gearboxes stand at 11.9s and 12.5s respectively.

The German brand claims the new T-Cross diesel is the most fuel-efficient SUV available in its line-up, with economy figures of 52.9mpg and emissions ratings of 140g/km of CO2. In its most efficient format, the petrol-powered T-Cross musters respective figures of 48.6mpg and 131g/km of CO2. 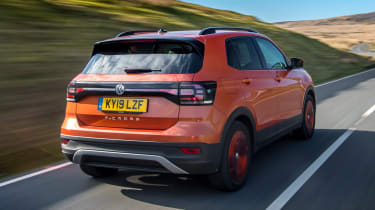 Volkswagen’s turbocharged 1.0-litre three-cylinder petrol unit is still available in two states of tune. S and SE-spec models produce 94bhp and 175Nm of torque, while the pricier SEL and R-Line variants come with 113bhp and 200Nm of torque. The entry-level model is only available with a five-speed manual, while SE models and above can be had with either a six-speed manual or a seven-speed DSG. 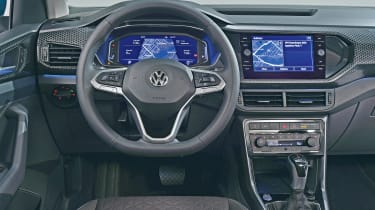 Range-topping T-Cross R-Line models get 18-inch alloy wheels, R-Line bumpers front and back, body-coloured side skirts and Volkswagen’s digital instrument binnacle. Prices start from £23,550 for the 6-speed manual version and £25,050 for the seven-speed DSG variant.

Optional extras include a choice of five alloy wheel designs, keyless entry, a premium sound system and a range of styling packages allowing buyers to customise the interior and exterior of their cars with a range of coloured trim. To keep costs down, a four-wheel-drive variant will not be made available.

The VW T-Cross sits beneath the T-Roc in Volkswagen’s lineup and shares a lot of its mechanical running gear with the Polo supermini. It’s based on the same MQB A0 platform and measures in at 4,107mm long and 1,558mm tall, which makes it 54mm longer and 97mm wider than the Polo. Drivers also sit 100mm higher in the T-Cross than they would in the hatchback.

Its chunky wheel arches, boxy profile and tall bonnet give the T-Cross a more prominent SUV look than any of its rivals. On paper, at least, it’s also more practical; the 385-litre boot – larger than a VW Golf’s – can expand to 455 litres with the rear bench slid forward, while dropping the bench completely frees up 1,281 litres of luggage space.

“The T-Cross is about versatility – that’s its number one focus,” Felix Kaschutzke, T-Cross project for manager sales & marketing, told Auto Express. “This car is built for young, small families, the car is very versatile for these types of customers.” 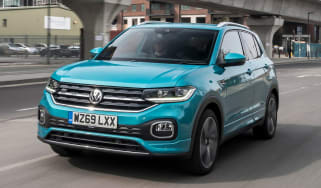 Volkswagen has expanded the engine range of the T-Cross SUV again, with a new 1.5-litre turbo petrol unit priced from £24,910
Skoda Kamiq vs Volkswagen T-Cross vs Citroen C3 Aircross 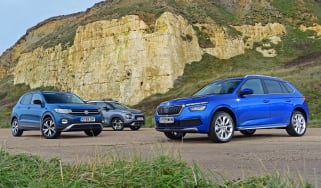