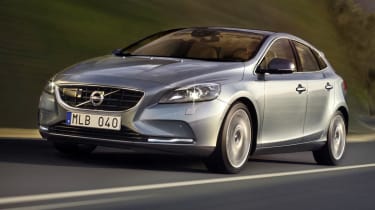 The new V40 has a style of its own, plus a finesse that should set it apart in this crowded market. With its safety, economy, style and dynamics, this Volvo should be popular with private and company car drivers. It’s far from cheap, but with an estate and maybe four-wheel drive on the way, the V40 has laid down a marker down in the premium compact sector.

Advertisement - Article continues below
You wait all day for a small family hatchback with a posh badge to come along, and four arrive at once. Not quite, but with the Mercedes A-Class, Audi A3 and VW MkVII Golf all arriving this year, the new Volvo V40 will have its work cut out.
On the outside, the five-door is squat and low – 1.8m wide and 1.4m tall. This goes against the class’s trend for higher-roofed designs. The 4.4m-long body is handsome, with a shiny black grille that hides a number of safety cameras.
Inside, it’s roomy in the front, with easily the most comfortable seats in the class, but there’s not much storage space and the door pockets are small. At 335 litres, the boot is smaller than a BMW 1 Series’, but an adjustable floor system allows luggage to be mounted on two levels. The load lip is a bit high, however.
Rear seats are comfortable and spacious, although six-footers will find their heads close to the roof with the optional panoramic roof fitted. There’s also a curve on the door sill, so access isn’t as easy as in some rivals.
Advertisement - Article continues below
Advertisement
Advertisement - Article continues below

Interior quality is good, with a refreshing design that uses familiar Volvo features such as the ‘floating’ centre console panel, which hides a storage bin. It also gets an all-new digital instrument binnacle that changes its appearance according to which of three throttle and steering settings (Eco, Elegance or Performance) is selected.
As you might expect, the V40 pushes class safety standards, with a city braking system that stops the car from up to 31mph if an impact is predicted. It also has radar and camera-based pedestrian detection systems, which apply the brakes if someone steps into the path of the car. The V40 even has an airbag under the bonnet to cushion any impact.
There is also a rear-end cross-traffic detector to warn of oncoming cars when you are reversing, and auto cruise control applies the brakes in slow traffic.
Three petrol engines and two turbodiesels are available. The UK’s best seller is likely to be the 115bhp 1.6-litre diesel. Based on a Ford engine, it claims 78.5mpg and emits a road tax- free 94g/km of CO2. There’s not much grunt at low revs, but things improve above 2,000rpm.
The new V40 is built by Volvo at its Ghent factory in Belgium, with the chassis and suspension derived from the Ford Focus. Volvo has made tweaks, as well as adding a stronger steering column and higher-quality dampers. It shows, and the smooth ride is up there with the best in class.
The electronically assisted steering is accurate but lacks feedback, so you’ll still have more fun in a BMW 1 Series. But agile handling, strong grip and sophisticated dynamics mean it should be a match for the new Audi A3. It’s a strong contender in this growing class.
Advertisement
Share this on TwitterShare this on FacebookEmail
Advertisement