The A5 is not all that exciting from the outside, but a state-of-the-art cabin makes up for it 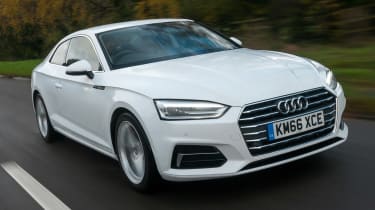 The latest Audi A5 isn’t a radical departure from the old model in terms of styling. The sloping roofline gives its some visual impact but the lines and overall shape of the coupe are quite conservative.

The body is a little longer but also narrower than before and the subtly embossed bonnet helps to differentiate it further from its A4 saloon sibling. Optional LED headlights also bring a new lighting signature and have been developed to avoid dazzling other road users when they’re driving towards you.

The A5 may not be the most visually appealing from the outside but the cabin is beautifully executed. The quality of plastics used inside the Audi is impressive and goes some way to justifying its hefty price. 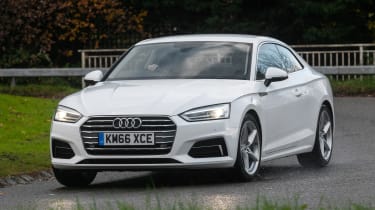 All A5s now come fitted as standard  with Audi’s Virtual Cockpit – its 12.3-inch widescreen display shows the sat-nav display straight in front of you, making it easier to follow the route guidance, while you can also change the radio station and look at the car’s efficiency data through the different menus.

It’s a hi-tech feature that fits well with the A5’s well-crafted cabin. Build quality is brilliant throughout, with a simple but smart layout to  the centre console adding to the premium feel. 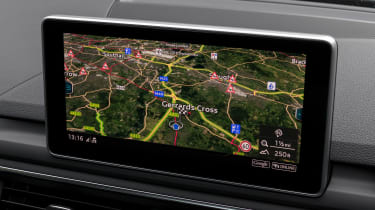 Every version of the A5 now comes with Audi’s 10.1-inch MMI infotainment set-up including navigation and a 36-month subscription to the Audi Connect service. This has a 4G connection and gives access to the brand’s various apps, plus Twitter and Google Streetview for detailed route-finding assistance.

All this is controlled via the manufacturer’s intuitive MMI rotary dial and shortcut keys that are located on the centre console. There’s also a standard voice-control option – although using it takes a little patience.

One of the biggest sacrifices you have to make when opting for a coupe over a saloon is a lack of practicality. Having only two-doors can make access to the rear slightly awkward for taller adults and rather than three rear seats, you’ll only find two.

Once back there you will notice that there is more head and legroom than you’d initially think. Another plus is that the boot is only 15 litres down on the A4 saloon at 465 litres. That’s also 65 litres more than you get in a Mercedes C-Class Coupe.