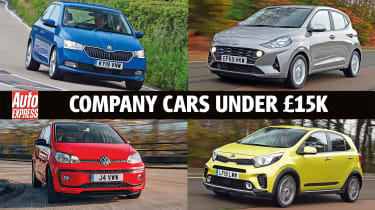 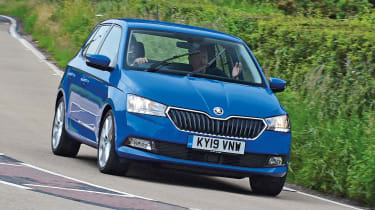 The Skoda Fabia is by no means the best supermini on sale, but it’s a sensible all-rounder that offers tidy handling, good passenger space and solid refinement. The fact that it costs a lot less than £15,000 in SE trim makes it incredible value too.

This is a step up from the entry-level spec and it adds front foglights, a multifunction steering wheel with radio and telephone controls, a 6.5-inch touchscreen, rear parking sensors and – true to the Skoda brand – an umbrella under the front passenger seat for extra practicality.

The 1.0-litre engine that works so well in the VW up! and Skoda Citigo struggles a little in the larger Fabia, which means there’s more noise in the cabin at higher speeds. However, CO2 emissions are still relatively low, so this will be a cheap company car to run. Its ride is refined, though, smoothing out poor surfaces impressively well, and the car’s 330-litre boot makes it practical, too. 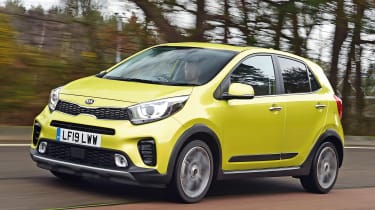 The third-generation Picanto was launched in 2017, and it offers a grown-up drive with an extensive kit list that defies the price tag. We’d recommend the Titanium Edition, with 15-inch alloys, tinted glass, a seven-inch touchscreen, a reversing camera, Apple CarPlay and Android Auto, plus several mod cons you might have been resigned to losing at this price.

Inside, the sheer amount of space is impressive, especially in the rear thanks to the Picanto’s best-in-class boot capacity of 255 litres. Owners will like the Kia’s low running costs too, with more than 50mpg claimed from the car’s 1.0-litre petrol engine. You’ll need to rev it hard to make swift progress on urban roads, but most of the time the Picanto is calm and quiet.

The car’s wheelbase is longer than most rivals’, so the ride is decent too, although sharper disturbances in the road surface will make the car pogo up and down. 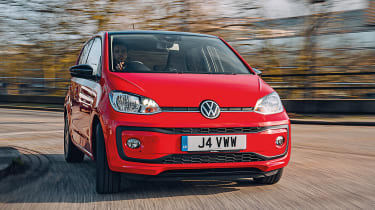 The Volkswagen up! is as good as it gets in the city car class right now, giving drivers a mix of comfort, stability and enjoyment that’s almost impossible to replicate at this price.

Our recommended entry-level trim is all the up! you’ll ever need, with 15-inch alloy wheels, body-coloured trim pieces, LED daytime running lights, air-conditioning, a five-inch colour screen, Bluetooth connectivity, DAB radio and a variable height boot floor all standard. And for anyone disappointed by the lack of smartphone integration, there’s a cradle on top of the dashboard that allows you to use your phone as a sat-nav through Apple CarPlay, Android Auto, Google Maps or VW’s own app.

Surprisingly, the up! is a very entertaining car to drive, despite the modest 59bhp produced by its engine. The VW’s chassis provides more grip than rivals are capable of, allowing you to carry more speed through corners. And if you can avoid heavy use of the throttle, it’s one of the more refined cars in its class, too. 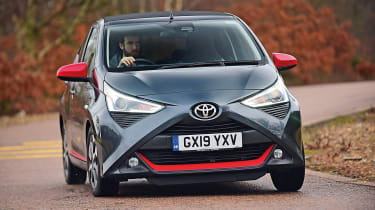 If low costs are your priority, you’ll struggle to do much better than the Aygo; its engine returns around 50mpg, and fairly low CO2 means just £54-per-month BiK bills.

The engine is characterful and a bit noisy, but Toyota has worked hard to cut road and wind noise, even if the car isn’t as refined as the Hyundai or VW. x-trend trim gets automatic lights, climate control and a multimedia system with DAB and reversing camera, plus Apple CarPlay and Android Auto, and scope for customisation.

Safety is a top priority, with several systems standard. Models with the Safety Sense pack get AEB and lane-departure warning systems too, so we’d go for this model. 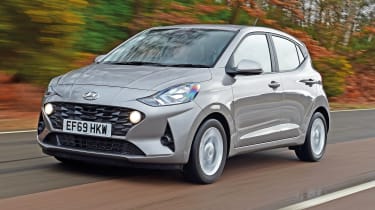 Not that long ago the i10 was considered the best city car, and although rivals have overtaken it, this latest version has more tech, refinement and practicality.

SE Connect trim is the sweet spot in the line-up, with an eight-inch touchscreen, Apple CarPlay and Android Auto connectivity, air-conditioning, DAB radio, cruise control, a rear-view camera and AEB all standard.

The 66bhp 1.0-litre petrol engine doesn’t sound like a lot, but it’s fine around town, while low CO2 emissions keep BiK bills down. The ride is a little firm, but it’s not too harsh, and the car feels mature on the motorway, as well as offering more practicality than some superminis. 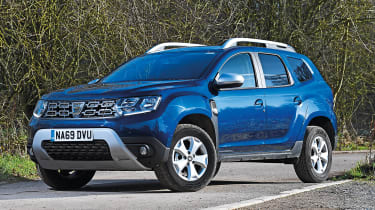 Thought you could only stretch to a city car at this price? Think again. The Duster is a budget vehicle, but this family-sized SUV delivers unrivalled practicality. It’ll seat five adults, and has a handy 445-litre boot capacity.

The mid-spec Comfort trim is the best, adding cruise control and 16-inch alloys, plus some design tweaks to make the Duster look slightly more polished. A seven-inch touchscreen with nav and smartphone connectivity is also thrown in, along with a rear-view camera.

You’ll want the new 1.3-litre TCe 130 engine for adequate performance, but it doesn’t compromise CO2 and therefore company car tax too much.