A remarkable balance between fun handling and comfort, with strong engines to exploit its ability

Creating a car that handles with composure and a sense of fun is a challenge for manufacturers, but to do so from the starting point of a tall and relatively heavy SUV is even more taxing. Remarkably, the X4 is a sure-footed SUV that makes it easy to forget its size and shape from behind the wheel. While it’s based on the X3, it feels a little more sporty. That’s partly down to the view from the driver’s seat, but the X4 also has stiffer suspension and a wider rear track. The result is that the X4 handles with remarkable composure, and rarely feels like a tall vehicle considering the way it behaves through corners.

Despite the sporty handling, the X4 is a comfortable car to travel in. Even in M Sport guise the ride remains composed and avoids feeling too firm. Only the occasional large bump causes any discomfort in the cabin, but the optional adaptive dampers give even greater comfort when in their softest setting, so they’re a worthwhile upgrade. That gives the X4 the ability to cope with broken urban roads, motorways and challenging B-roads with equal ease, and even though the X4 is designed to provide a sporty driving experience, it retains good off-road ability too.

The eight-speed automatic transmission is excellent in the X4. It shifts smoothly and quickly, while the separate drive modes mean the gearbox changes its shift points depending on the setting for better performance or economy. Manual shifting is also possible, either by the paddles on the back of the steering wheel or by using the gearlever for full control.

The X4 M Competition is the fastest and sportiest model in the range; it shares its 3.0-litre straight-six with other BMW M products and has performance to match, all the while sounding great through an adaptive sports exhaust. Handling and grip are impressive for car of this size and weight, but the ride quality is lacking – the Jaguar F-Pace SVR is far more comfortable but still offers similarly ludicrous performance.

The 2.0-litre diesel unit found in the xDrive20d is likely to be the most popular choice, and it performs very well in a variety of circumstances. Although it is not as quiet as the equivalent four-cylinder Audi engine, it still offers good refinement, and balances decent performance, with a 0-62mph time of 7.9 seconds, with impressive fuel consumption of 47.9mpg combined. 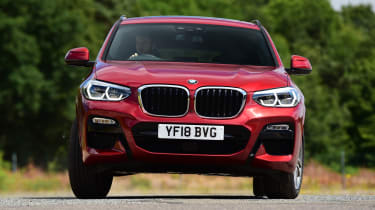 Moving up to the xDrive30d brings the additional performance of the six-cylinder 3.0-litre diesel unit, with the further benefit of it being significantly smoother than the four-cylinder diesel. It turns the X4 into a genuine performance car yet only results in a small penalty in terms of increased fuel consumption. The M40d model is quicker still, with the twin-turbocharged unit pushing the X4 from 0-62mph in only 4.9 seconds and delivering rapid response to the driver’s inputs.

Next up is the 3.0-litre twin-turbocharged unit in the M40i model, which is also biased towards performance. Its six-cylinder configuration means the engine is smooth even at high revs and provides impressive acceleration. However, it's no faster from 0-62mph than the M40d model, and has higher fuel consumption.

The most powerful engine in the range is the 503bhp twin-turbocharged 3.0-litre straight six found in the X4 M Competition. There’s enough power to tap to push the two-tonne SUV to 62mph in 4.1 seconds and on to a limited top speed of 155mph.