The BMW X4 sets out to mix the design elements of an SUV with those of a coupe, and more than most cars only a potential owner can decide if it has been a success. The lower half of the body carries the bulk and toughness expected from an SUV, with the curved roofline of a coupe sitting on top of it. Anyone looking for something more conventional should find the X3 to their liking, but at the very least the X4 offers distinction in a crowded vehicle segment. Underneath the X4 lies the same platform as used in the X3, with the only significant changes being a wider rear track to increase cornering ability.

Inside the X4 is an unquestionable success, combining attractive design with quality materials to great effect. The interior is another element that is largely carried over from the X3, but in this instance that is good news; the layout is attractive but understated, easy to understand and adds to the sporty feel of the car. Where fitted, the leather is of a high quality, and the vast majority of the plastics in the cabin are soft and pleasing to touch. 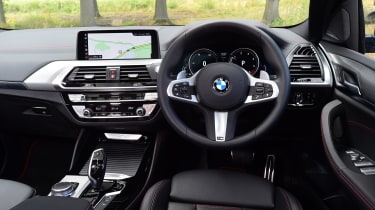 X4 M Sport models and above benefit from a part-digital instrument display, although the crisply-designed analogue set-up in the Sport model is still attractive and easy to read. A full digital display is an option on X4 models and standard on the M40d and M40i.

All X4 models come with satellite navigation and a DAB radio as standard. Sport models have BMW's Live Cockpit Plus, which includes an 8.8-inch touchscreen display. M Sport versions and above are fitted with BMW Professional Navigation which increases the screen size to 12.3-inches.

However you control the system, it responds quickly and accurately, and the display uses clear and attractive graphics. Gesture Control is also available as an option, allowing you to use hand movements to make basic inputs, although this system is still relatively new and limited in its scope. The system can be specified with Apple CarPlay, with Android Auto available from mid-2020.