Generous space for passengers and luggage, but the steep-sloping rear roofline means compromises have to be made

Anyone choosing the X4 over the X3 is making a conscious decision to sacrifice some practicality in favour of a sportier drive and more dynamic-looking exterior. But even allowing for that it still performs well in this respect. It is designed to seat four adults in comfort and can accommodate a fifth in a narrow seat for shorter journeys.

From the driver’s seat the view out is good, helped by the height of the body, although the view to the rear is somewhat reduced by the shallowness of the tailgate window. Oddment storage inside the cabin is impressive, with a generous glovebox, door pockets and a large central storage area between the seats. An optional extended storage pack is also available that adds features such as extra storage areas, 12v and USB sockets and the facility for securing loads in the boot.

At 4,752mm in length, the X4 is longer than both the Mercedes-Benz GLC Coupe and BMW X3, but only by a matter of 20mm in the case of the Mercedes. The same goes for height and width, but the differences between the X4 and X3 are more clear, with the former being longer, lower and wider than its stablemate despite riding on the same platform, with an identical wheelbase.

Those sitting in the front are well catered for, with excellent head and legroom and a broad range of adjustment - supportive sports seats are fitted as standard on M Sport models and above. Those in the rear can also enjoy generous legroom, sufficient to sit taller adults in the rear. Where the X4 lags behind the X3 is in rear headroom, with those of six feet in height likely to find their heads making contact with the roof lining. The centre rear seat is also best used for shorter journeys, as it is narrower and lacks any kind of side bolstering. The transmission tunnel also eats into legroom for the central passenger. 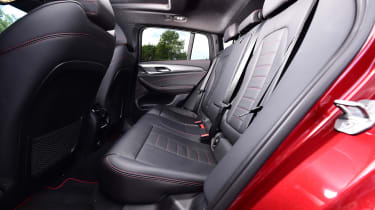 From the outside it is hard to believe that the X4 offers much luggage space, but there’s 525 litres with the rear seats in place, and up to 1,430 litres with them folded. The rear bench can be split 40:20:40 for maximum flexibility and the powered tailgate is also a useful addition. In terms of volume the X4 is close to offering the load capacity of the X3, but the shape of the tailgate and the steeply-raked window means bulkier items will not fit and loading the vehicle is more of a challenge thanks to the smaller aperture.

The X4 can be specified with a towing package which includes an electrically folding tow bar and the addition of trailer stability control to the standard Dynamic Stability Control system. The maximum trailer load is 2,000kg depending on the engine, and although those wishing to tow might choose a different BMW model, it may be a useful option for some.