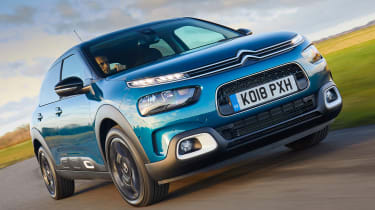 One thing’s for sure, the C4 Cactus is a car that embraces the Citroen brand’s quirky past, and its proportions are unlike anything else on the road: Raised suspension, a low roof, long wheelbase and rounded nose give it a shape that falls somewhere between a crossover and a hatchback.

The front end takes some inspiration from the C3, with high-set LED running lights integrated into the outer edges of the front grille, while the main headlamp units sit just below. Further back, the curvy wheelarches feature plastic extensions, and behind this the sides of the car incorporate one of its big talking points – the Airbump panels.

On the facelifted model, these have moved from their previous prime spot, across the middle of the doors, to their lower edges. While not as conspicuous - or as squidgy - as before, they still offer useful protection from potential car park dings and paint scrapes.

While the new Airbumps aren’t offered in the same range of colours as the old ones, on top spec Flair models they’re available with a choice of coloured highlights which break up the large swage of black plastic.

The Airbumps have disappeared at the rear, too. As a result, it looks a little more plain than before. Other design highlights include the substantial - albeit optional - roof bars, while the black contrast door pillars and mirrors add a touch of class. 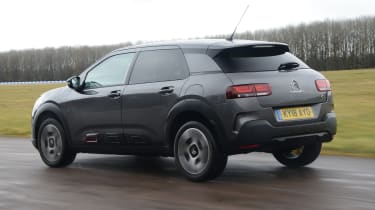 Those C-pillars appear thick from the outside, although they don’t actually spoil over-the-shoulder visibility. A variety of shades are on offer, with buyers able to personalise their cars to a fair extent. You can go for a subdued colour or a vibrant finish to show off the Citroen’s unusual design elements and, in fact, the brighter the better, as it picks out the C4 Cactus’s striking design and contrasting areas.

Inside, the C4 Cactus takes inspiration from the upmarket DS range, and features a stylish layout that has a premium feel. There are asymmetric air vents on the centre console, a top-opening glovebox, luggage handle-inspired door pulls, a seven-inch touchscreen and a smart-looking oblong readout ahead of the driver.

The seats are wonderful, and the driving position is low so the C4 Cactus doesn’t feel as tall from behind the wheel as the suspension suggests. In the back Citroen has ditched the single-piece folding rear bench of the earlier cars and replaced it with split-folding, while the touchscreens that control the heating, infotainment and other vehicle functions mean the interior feels far from basic.

Some of the plastics used lower down in the cabin look cheap, but everything you touch frequently – steering wheel, gearlever and door pulls, for instance – has a high-quality feel. You get all the essentials, too, such as climate control, Bluetooth connectivity and a DAB radio.

All C4 Cactus models feature a seven-inch touchscreen, which combines all secondary control functions for the radio and climate control in one space. It’s not the best system on the market, with slightly slow response times, and the need to switch away from the nav or media menus just to tweak the climate control can become tiresome. The graphics look clear and colourful, though.

The system includes a standard digital radio, while Bluetooth music streaming and Citroen Multicity Connect, which is a 3G and GPS-enabled app-hub are included. The Flair comes with the Navigation and Hi-Fi Pack, which includes a six-speaker stereo, 16GB Jukebox and Arkamys amplifier. 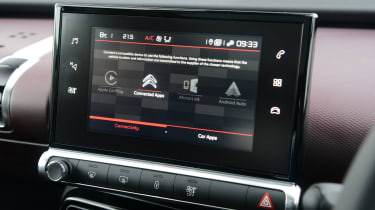