City cars will always be tight on space, but the Picanto maximises its dimensions with a roomy interior and decent boot 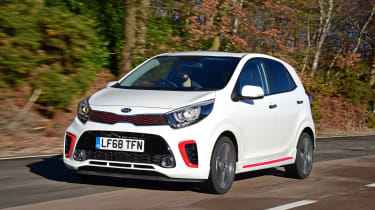 Few people buy a city car for outright practicality, but for those interested in a tiny car with generous interior dimensions, the Kia Picanto impresses.

There’s no three-door model, but access via the wide-opening rear doors makes getting in and out infinitely easier. There are two seating configurations; with the four-seat model offering improved emissions. The five-seat car is more versatile though, giving buyers the option of carrying an extra passenger when the need arises.

Visibility is good, thanks to the thin pillars and upright rear screen, with top-spec cars offering a reversing camera as standard. Other practical features include a small central armrest, as well as usable doorbins and a decent glovebox. You’ll also find a couple of cupholders ahead of the gear lever.

The Mk3 Picanto is no longer overall than the car it replaces. However, by extending the distance between the front and rear wheels, the designers and engineers have managed to increase cabin comfort for all passengers.

At just over 3.5m-long, the Picanto is among the smallest cars on sale. A Skoda Citigo is ever so slightly shorter, but it beats the Hyundai i10 for dinky dimensions. At 1.59m-wide, it’s easy to park, too. The X-Line versions have slightly increased dimensions, being 30mm wider and 15mm taller, with overall length also up by 75mm. 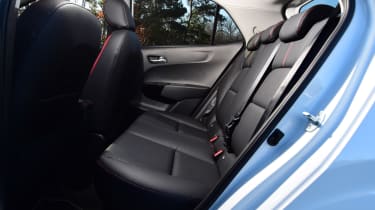 The longer wheelbase has definitely freed up more knee room in the rear, and decent door openings mean it’s easy to get into the back. Storage and ergonomics are acceptable as well, although seat comfort could be a little better for longer journeys.

Four and five-seat configurations are available to UK buyers. The five-seat model is more versatile, however, and many buyers will value the enhanced versatility over the extra real-world range. 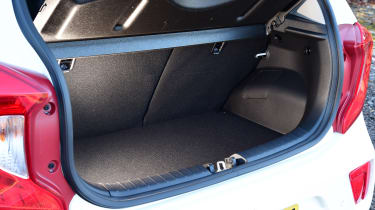 The Picanto actually boasts best-in-class boot space. Enlarging the Picanto’s platform has created more luggage room as well as cabin space. The boot is now 255 litres with the seats up (nearly as much as in some superminis), and rises to 1,010 litres with them folded down.

Few people buy a city car to carry really big loads, but on the odd occasion when space is a priority, the Picanto can deliver. In comparison, a Hyundai i10 offers 252 litres, while the VW Group trio of SEAT Mii, Skoda Citigo and VW Up!, boast 251-litre load bays.