The A-Class has excellent economy figures and solid residual values, but insurance costs are steep

Predictably, the A-Class diesel options are the most frugal in the range and offer excellent returns from a tank of fuel. The A 180 d achieves a claimed maximum of 62.8mpg when paired with the seven-speed auto transmission and CO2 emissions of 117g/km.

Opting for more diesel power doesn't mean you have to take a huge drop in economy - the A 200 d and A 220 d deliver 58.9mpg and 57.7mpg on the combined cycle, respectively.

There's nothing to really separate the A 180 and A 200 petrol models either in terms of fuel efficiency, with both capable of around 47mpg. Emissions are dependent on which equipment level you choose, but start from 134g/km for the A 180 and 135g/km for the A 200 six-speed manual versions.

The A 250 trades some economy for performance compared to the smaller petrol, though if it gets close to its claimed 41.5mpg and 155g/km in the real world, it’ll be impressive. 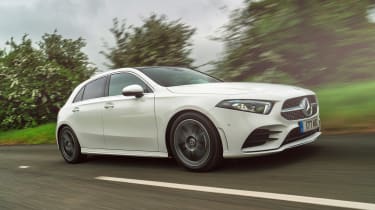 If you're prioritising efficiency, the A 250 e hybrid will appeal as Mercedes claims an all-electric range of 43-44 miles – equating to a staggering 256.8mpg. That latter figure is somewhat meaningless, however, as with frequent charges you could reasonably run this car for months without filling it up with fuel even once. The fact it emits only 25g/km of CO2 will be more relevant to business users, who will save a fortune in company car tax.

The strong figures across the standard A-Class range are no doubt partly thanks to a slippery body shape, which Mercedes claims that is the most aerodynamic in its class.

Naturally, the performance-oriented AMG A 45 S model is the least efficient of the range, although a claimed 32.8mpg on the combined cycle is still a good return when you consider it produces a staggering 415bhp.

Although buyers will have to pay handsomely to own and insure a new A-Class, the range offers good residual values with an average of 47% retained over 3 years and 36,000 miles. The A 250 e models perform even better, keeping hold of around 51% of their original value over the same period.