Boot and cubby spaces are an improvement over the old car’s, but the A-Class is still not as roomy as an Audi A3

The A-Class is available as a five-door hatch and four-door saloon. Up front, the driving position is great – there’s plenty of adjustment for both the seat and the steering wheel, so it’s easy to get comfy. Mercedes has made an effort to slim down the plastic trim around the pillars, and as a result visibility, particularly over the shoulder, has improved. However, it can feel a little claustrophobic in the back compared to some of the A-Class’ rivals because of the front seats – their shape and size block out a lot of the light. 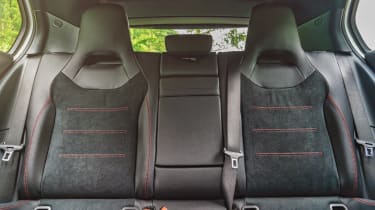 In terms of cubby spaces, the A-Class is pretty standard for the class. There’s a big central storage bin, a couple of cup holders ahead of the infotainment touch pad, and a smartphone-sized space at the base of the dash. The front door pockets are roomy enough for a large bottle, but those in the back are small.

It's worth noting that while refinement is good on most models, the A 35's large 19-inch wheels roar on the move – a trait that's pretty tiring on longer journeys. The car's sporty bias also means it feels a bit fidgety on the move, detracting from long-distance comfort.

The A-Class hatchback measures 4,419mm long, 1,796mm wide and 1,440mm tall. That’s 30mm longer than the old car, and larger than the A3 Sportback in every dimension – the extra 106mm in length could make a difference when parking in tight spaces. The 2,729mm wheelbase is also longer than the A3’s 2,637mm space between its axles.

The saloon model is longer at 4,549mm, but is the same width and just 6mm taller. 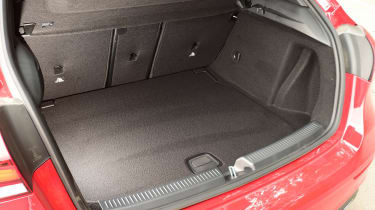 Mercedes states that there’s more elbow and headroom in the back compared to the previous A-Class. However, a lack of kneeroom means that when filled with four six footers, it’s more cramped than the Audi. Headroom is fine, unless you’re in the raised middle seat. That central berth is narrow too, so it’s not a comfortable place to sit.

On the plus side, it’s really easy to fit a child seat. The Isofix mounts are clearly exposed by plastic openings, and the doors open fairly wide.

One criticism of the previous model is that the boot wasn’t just smaller than most rivals, but hard to make use of due to a narrow opening. The new car addresses both of these issues to an extent – the opening is a useful 20cm wider, and the total volume is up 29 litres, taking the total to 370 litres. That’s a nominal 10 litres fewer than front-wheel drive A3 models, but more than quattro-equipped cars. There’s also a tiny bit of underfloor storage for hiding away smaller items.

The rear seat backs fold in a 40/20/40 split, but the boot floor isn’t quite flat. With the seats down it increases the capacity to 1,210 litres – still 10 litres less than the Audi.