From Volvo 850 estates to Alfa Romeo aero controversies and fierce on-track rivalries, the peak of Super Touring had it all 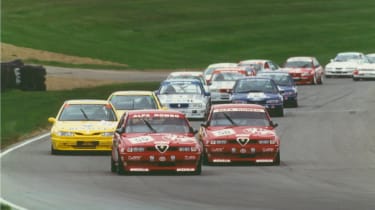 As the world of racing shuts down in response to the coronavirus pandemic, Auto Express is looking back at some of the great cars, drivers, races and moments from motorsport history. Our second instalment takes us back to the British Touring Car Championship’s momentous 1994 season.

Many fans love F1 for its soap opera, but I prefer motorsport with a side order of paint rubbing, close-quarters racing and cars relatable to ones you see on the street. The British Touring Car Championship, in other words. And in 1994, it reached new heights.

It blended the very best tin-top racing with West Wing-esque political intrigue. It made superstars of cars and drivers, and deep-pocketed manufacturers spent big.

The drama kicked off before a wheel was turned in anger, with the launch of a very unlikely hero. There was nothing unusual about Volvo entering, but with an estate?

Volvo and TWR, which ran the effort, knew an estate car was wrong for many reasons, not least because of the weight behind the rear wheels, plus a high centre of gravity. But the marketing power of this wagon outweighed any dynamic losses. Even in the hands of talent like Jan Lammers and Rickard Rydell, it rarely finished inside the points, but the marketing job was done – the firm’s image in the UK was changed forever.

Volvo wasn’t the only team ripping up the rulebook in 1994, though. Alfa Romeo’s return to the series was shrouded in controversy. Its 155 was undeniably pretty, but in its homologated ‘Silverstone’ trim, it sported a large rear wing. Nothing wrong with that in theory, but it wasn’t a rule that the rival teams had sought to exploit. 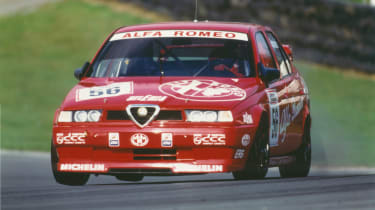 The issue, claimed every other team, was that the road car was sold with the wing in its retracted position and extension plates in the boot, but the race cars had their extension plates installed. Rivals claimed an unfair advantage, and Alfa’s total dominance of the first five rounds of the series that year suggested they were right.

At round seven at Oulton Park, the series organisers instructed Alfa Romeo to remove the aero parts, and the team left the circuit in protest. A compromise was reached, and the team returned – with the rear spoiler in its retracted position. By the time of round 12 at Silverstone, other teams had found aero aids of their own, and balance was restored. It wasn’t just these shenanigans that entertained, though. The racing was closer than ever, spurring Murray Walker to his best. And in race trim, even the humble Ford Mondeo, Nissan Primera and Toyota Carina looked a million dollars.

As audiences grew, so did the pockets of manufacturers; by 1998, Super Touring cars could cost more than £1million to build, and £5million a year to race. Highlights were many and varied, and the season review was barely out of my VHS player.

Later seasons had more manufacturer support and bigger-name drivers, but 1994 is the one I’ll always remember.

What's your favourite BTCC memory? Let us know in the comments below...