What does the new Porsche Cayenne Coupe offer over the standard car? We try it out in Turbo guise to find out

Which Porsche Cayenne you go for will depend largely on your sense of style, as the Coupe is almost indistinguishable from the standard car on the road. It’s a little less practical, and a little more expensive, but for the type of buyer this car is likely to attract, that won’t matter one iota. It remains one of the sharpest SUVs on sale, and now comes in a package some customers will find impossible to resist.

The original Porsche Cayenne set a high handling benchmark in the luxury SUV class when it launched almost two decades ago. It has solidified its place at the front of the pack ever since, with the latest version retaining its dynamic honours when it debuted towards the end of 2017.

But while rivals like Mercedes and BMW have reaped the rewards of diversification, it has taken Porsche a little longer to come round to the idea of expanding its SUV range. Better late than never, the German maker stunned crowds at this year’s Shanghai Motor Show with the aptly named Cayenne Coupe.

The badge is self-explanatory, and plays on a theme BMW has owned since the first-generation X6 went on sale back in 2008. From nose to B-pillar the sleekly styled Porsche is pure Cayenne – albeit with a slightly flatter windscreen. But from the driver’s door back, it takes on an altogether more aggressive stance. 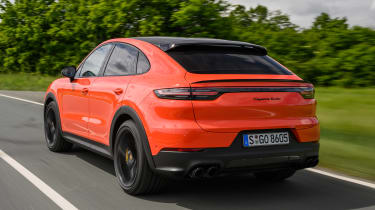 Much like the Audi Q8 with which it shares a platform, the Cayenne Coupe’s roofline tails off much sooner (it’s 20mm lower) than on the standard car. Sticking closely to the coupe-SUV rulebook, the rear window is steeply raked, fusing at the base with an adaptive tailgate-mounted spoiler. The standard car’s numberplate has been moved to the bumper for an “optically lower” aesthetic; in its place sits Porsche’s distinctive ‘Turbo’ lettering emblazoned on the bootlid.

Bosses describe the car as a “real Porsche sports car”, and there will be three models available at launch. In addition to the flagship (for now) Cayenne Turbo, Porsche will also offer an entry-level 335bhp V6 Cayenne Coupe, and a 434bhp Cayenne S. Prices start from £62,129, and rise to £104,729 for the Turbo tested here. That’s a premium of around £5,500 depending on trim.

As you’d expect, that swooping roofline has a positive effect on performance. This Cayenne Turbo Coupe is an SUV that’ll sprint from 0-62mph in 3.9 seconds (two-tenths fast than the normal Cayenne Turbo) and hit a 911-baiting 177mph. Does it feel faster the standard car? No – though that’s perhaps more of a compliment of the conventional Cayenne rather than a dig at this Coupe variant; few 2.3-tonne tanks bend the mind with such complex efficiency.

Unlike a Lamborghini Urus the engine doesn’t dominate the driving experience. It’s always there; ready to launch the Cayenne towards the horizon at a moment’s notice. But the V8 isn’t as relentlessly boisterous as it is in its Italian stablemate. Instead, it just burbles away in the background; the wave of torque never further away than a simple flick of the right foot.

The fact the engine doesn’t overwhelm the driver’s involvement is partly due to how capable the Coupe is from a dynamic perspective. The wider rear track and permanent all-wheel-drive system – mated to our car’s clever rear-wheel steer set-up – make the Turbo feel more agile than many models half its size. The difference between the ordinary Cayenne and this new Coupe is difficult to detect, but credit where credit’s due, this is a sports utility vehicle well worthy of the Porsche badge. 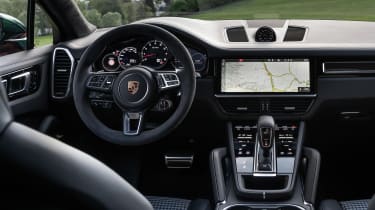 Our car had the optional (£7,482) Lightweight Sports Pack, which switches the car’s standard panoramic glass roof for a full carbon fibre item – saving a substantial 21kg and lowering the Cayenne’s centre of gravity. Among other things, it adds a sports exhaust, 22-inch GT Design wheels and some extra carbon trim. It also removes some of the standard car’s sound insulation, with a notable affect on refinement. If you want a quiet SUV – something the Cayenne Coupe is perfectly capable of being – we’d avoid these options.

Regardless, turn-in is razor sharp, and on the tighter roads of our test route the Coupe displayed an astounding ability to swivel almost on its own axis. Body roll is near enough nil, and the steering nicely responsive. It’s weighty without feeling artificial, and has no trouble pointing the car where you want it to go.

In our experience, the Cayenne Coupe’s biggest issue is its tendency to fidget around town. This is likely caused, at least in part by those big rims, which force the Cayenne to follow ruts in the tarmac that are almost invisible to the naked eye. Things improve the faster you go, but given our mostly smooth Austrian route, the low-speed ride is only likely to worsen on rutted UK roads. 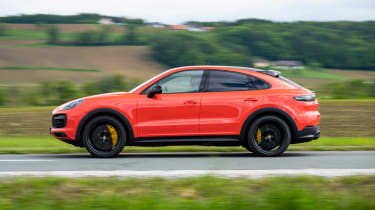 Inside, you’d be hard pushed to tell the Coupe apart from its conformist Cayenne counterpart. Every version gets the same 12-inch infotainment system, largely touch sensitive dashboard and 911-style analogue rev counter. As in its sports car sibling, the central tacho is flanked by four digital readouts, customisable to the driver’s taste.

Look in the rear view mirror and the differences become clearer, however. The conventional three-seat rear bench has been completely reconfigured to offer two individual chairs; that emphasises the Cayenne Coupe’s sporting intention, but inevitably affects practicality. Despite being positioned 30mm lower, there’s an obvious compromise when it comes to headroom – though it’s certainly no worse than in an X6 or Mercedes GLE Coupe.

Boot space measures an admirable 600 litres, which is 145 litres down on the standard Cayenne. However, while that may not sound much, in reality, that sloping roof will limit the SUV’s outright versatility. If you want a proficient load lugger, this may not be the right car for you.