What impact does new four-cylinder turbo have on the great-driving Porsche 718 Cayman coupe?

The new 718 Cayman S is faster, even sweeter handling and more efficient dynamically in every way conceivable compared with its predecessor. But there is one key area in which it isn’t as thrilling – and that’s the sound and delivery of its engine. Depending on how much you value such things, therefore, it’s either a mild disappointment or a big step forwards.

With the previous Porsche Cayman, it was all about what happened in the corners. The car had such a beautifully balanced, mid-engined chassis, and such lovely, crisp steering to go with it, that the brilliance of its flat-six powerplant very nearly went unnoticed.

With this all-new 718 Cayman, however, the engine is very much the star attraction, although not necessarily for the right reasons. Why? Because, as with the 718 Boxster, the Cayman now comes with a turbocharged four-cylinder, not a screaming, atmospheric flat-six.

And that begs one very simple question: has the coupe gained a turbo but lost its mojo in the process, or is it in fact better than ever, thanks to its increases in power, torque and therefore performance? The version we test here is the top-spec S model, which costs £48,834 and boasts a fulsome 345bhp and 420Nm. 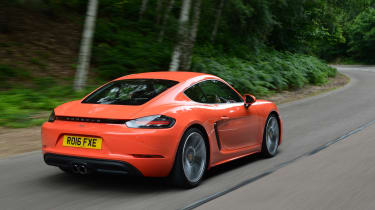 With the standard-fit six-speed manual gearbox, that’s enough to send the Cayman S from 0-62mph in a mere 4.6 seconds and on to a top speed of 177mph. Specify the PDK option and choose the Sport Chrono package as well, and the quoted 0-62mph time drops to 4.2 seconds, with 0-100mph taking only 9.2 seconds. Those are fearsome acceleration figures by any standards this side of £100,000.

Yet at the same time, the car’s CO2 and economy figures have also improved hugely over those of its predecessor, with the standard 2.0-litre car pumping out 158g/km and claiming 40.9mpg, and the S 184g/km and 34.8mpg as a six-speed manual or 167g/km and 38.6mpg with the PDK.

In a way, that’s what this latest, more efficient Cayman is all about: churning out a near-unbeatable series of numbers across the board, making it more appealing than ever – on paper, at least. 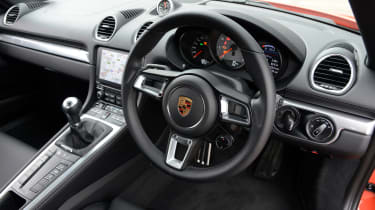 We’ll come to how the Porsche drives in a moment, but whatever the verdict, it certainly looks the business, inside and out. The exterior has been tweaked in several key areas to make it look lower, wider and meaner, hence the new front and rear ends, redesigned headlights and more prominent air intakes.

The chassis has also been uprated compared with the Boxster’s, and includes stiffer springs and dampers, bigger anti-roll bars, 10 per cent quicker steering and – with the Sport chassis option specified for an additional £1,133, as on our test car – a visually pleasing 20mm drop in ride height. At the same time, the S gets the braking system from the new 911 Carrera.

In theory, then, it all sounds pretty much unbeatable for the money. But what’s it like to drive, this all-new, turbocharged, four-cylinder, 177mph Cayman S? In every respect except one, it’s brilliant.

The ride, steering, handling, grip levels, brakes and gearchange are all breathtakingly good. The previous Cayman was already one of the sweetest sports cars money could buy at this level, and this new 718 is significantly sharper and better in all these crucial areas. Its chassis is a thing of rare genius, combining monster grip and precision with an exceptionally well resolved ride quality. 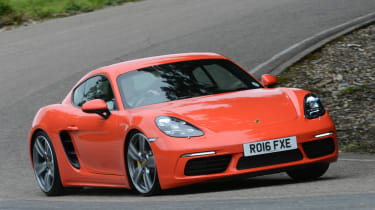 And yet, there is one nagging element to the car that doesn’t quite live up to the brilliance displayed everywhere else; the engine. There’s nothing wrong with the way the Cayman S goes in a straight line. Below 2,000rpm there is a whiff of lag, true, but above that it pulls very hard and is very fast. In the process, it propels the Cayman towards the horizon with huge energy. As a result, it feels much quicker than the six-cylinder car, especially in the mid-range, where the turbo’s extra torque makes a big difference.

The problem is the lack of aural excitement, plus the absence of that initial hit of throttle response that so defined the old flat-six versions. The noise the Cayman makes is no more than okay, but beside the old car it sounds at best plain, at worst anodyne. The addition of a roof seems, if anything, to have amplified this effect, with a slight boominess at certain revs.

That’s a shame, because the new Cayman S is otherwise an absolute peach of a sports car. Better than its predecessor in every single way, except one – and this time this doesn’t go unnoticed.