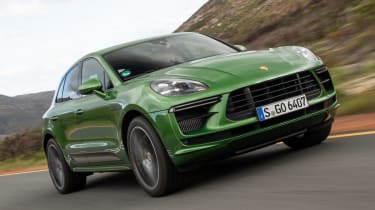 The Porsche Macan Turbo may have a new powertrain, but there’s nothing new about how impressive this SUV is. It’s still a showcase of how to launch a bona-fide performance SUV, blending pace and agility with genuine comfort and refinement. You’ll have to add a few options, however, as it’s not a fully-stocked range topping model; even leather is an extra.

Few SUVs make the case for performance pretention quite like the Porsche Macan. Since its arrival in 2014 it’s been regarded as the most convincing ‘sports’ utility vehicle on the market, and has quickly established itself as the best-selling Porsche, too. In 2018, the Macan outsold the 911, Cayman and Boxster combined - it’s indicative of a customer base now drawn to these more practical options over more traditional sports cars and coupes.

The new-look Macan line-up has, until now, consisted only of the base four-cylinder and the pricier S model. But at the hottest end of the scale now lurks the new Macan Turbo, and it’s all change under the bonnet.

It’s out with the old 3.6-litre turbocharged six-cylinder engine and in with a smaller, lighter, freer-revving 2.9-litre turbo V6, found also in the Panamera and Cayenne S models – as well as elsewhere in the Volkswagen Group empire, a la Audi RS 4.

The new engine produces 434bhp – an increase of 39bhp – and 550Nm of torque, produced between 1,800rpm and 5,600rpm. Drive is sent to all four wheels via a seven-speed PDK transmission. As standard, the Macan Turbo rides on steel springs with Porsche Active Suspension Management electronic adaptive damping. The brakes - 390mm at the front and 356mm at the rear - are coated in Tungsten Carbide to resist wear and reduce brake dust.

It all comes together to deliver an SUV that’s stellar to drive, and still, probably, the most convincing incarnation of an SUV with some form of dynamic kudos. The new engine is key to this, and its flexibility is welcome; leave the Macan Turbo in its most docile drive mode and with the active sports exhaust flaps shut it keeps its distance, burbling away up front while at a cruise.

Unleash the engine’s full potential and it hits hard and with urgency. The engine note booms with purpose and the seven-speed transmission comes to life, willing you to jump on the wheel-mounted paddle shifters. It revs out cleanly rather than with drama and distortion, but above 4,000rpm the engine comes on song, and this is where you feel the full pull of the torque on offer as the note climbs towards a 6,600rpm limit. 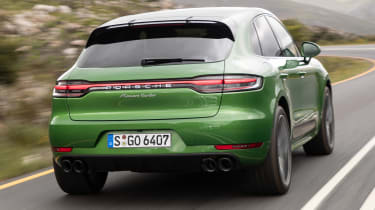 Preparing the Macan to do this is easy to master, too; a rotary switch on the steering wheel means switching into Sport, Sport Plus or the Individual drive mode is straightforward, while a prod of the Sport Response button mounted centrally in the dial unleashes a full-bore 20-second burst of power.

The Macan Turbo is overridingly grippy, skirting into natural understeer if you’re lazy with your throttle and steering inputs. Go in search of it, however, and a rear-bias can be unearthed. Transmit the right signals through your feet and hands, and the all-wheel-drive system allows for a bit of slip at the rear. It’s small and controllable, but never feels out of place – despite the Macan’s SUV silhouette. The steering is still as good as you can imagine an electric set-up being, giving you confidence to explore the Macan’s abilities.

On our car’s optional air suspension, it rode well too. However, we didn’t get the chance to try the Macan Turbo on its standard steel-spring set-up. We did try both the standard and the optional carbon ceramic brakes, though. They’re costly and at low speeds particularly grabby – but they make such a difference when hitting the middle pedal becomes top priority. 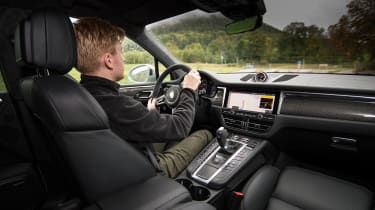 The sweet mechanicals are still cocooned in an impressive and luxurious package, with good space for four adults and a decent 500-litre boot. And yet despite the Turbo’s positioning at the top of the Macan ladder, full leather upholstery isn’t standard. A partial leather trim lines the interior by default, but a choice of 14-way adjustable Comfort or Sports seats is a no cost option. A 10.9-inch central infotainment unit with navigation is included, however, and it’s sharp and straightforward to use, too.