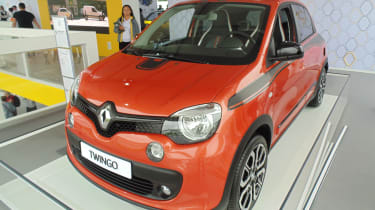 Renault has revealed full prices and specs for its spruced up, warm Twingo GT, as well as pricing details for its revised Twingo Dynamique S.

The Twingo GT will be on sale shortly – Renault has confirmed that it’ll hit UK showrooms on 1st December, starting from £13,775, while the updated Dynamique S model steps up in price to £12,205 on the road.

In the GT, Renault has tweaked its 0.9-litre TCe turbo petro engine to produce more power, up from 89bhp to 109bhp, while torque stretches to 170Nm from 135Nm. The Smart ForFour Brabus rival will sprint from 0-62mph in 9.6 seconds, and go on to a top speed of 113mph.

The extra power comes from a modified turbocharger, alongside an uprated fuel pump, revised engine mapping as well as a new twin exit exhaust system. The ride height has been dropped 20mm compared to the standard Twingo, and it gets stiffer shock absorbers and a larger anti-roll bar. 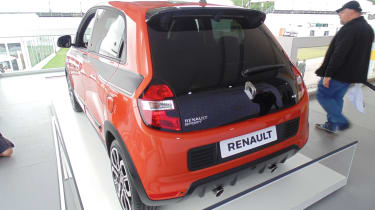 Being the range topping Twingo, it gets automatic lights, wipers and climate control as standard, plus reverse parking sensors and cornering fog lights. Safety and assistance equipment like automatic emergency braking, hill start assist, and cruise control is also thrown in.

An updated Dynamique S model will arrive alongside the spiced up Twingo GT, boasting a selection of sporty exterior and interior design tweaks.

The Exterior Touch Pack with front grille stripes, side door strips and coloured door mirrors is included and finished in red or white, alongside Sport decals and 16 inch alloy wheels.

However, customers can spec the GT’s body kit for £250, and tinted rear windows, automatic headlights and wipers, cornering fog lights, and rear parking sensors are all on the options list.

Inside, the Dynamique S gets a cabin mimicking the one found in the GT, with Sport part leather upholstery, aluminium pedals, Sport gear knob, and the Interior Touch Pack finished in grey.

It’s offered with the same engine and gearbox options as before, so a 69bhp 1.0-litre petrol alongside a turbocharged 0.9 litre TCe unit, with the choice of a manual or automatic gearbox.

Would you buy the 108bhp Renault Twingo GT? Let us know why below...