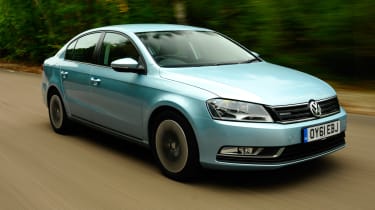 The Passat BlueMotion is the pick of the range. It looks the part, comes with all the equipment you need and boasts the same comfortable ride and excellent refinement that characterise the rest of the Passat range. It may not have the acceleration of the more powerful 2.0-litre TDI engines, but 250Nm of torque means that you will never struggle to keep up with other traffic. Best of all, it’s also one of the cheapest Passats in the line-up.

The previous Volkswagen Passat BlueMotion holds the world record for the longest distance travelled on a single tank of fuel – having covered 1,527 miles – but now a new, even more efficient version has arrived. We took to the road to see how it shapes up.
The new model comes with an aerodynamic bodykit, a bootlid spoiler, lowered ride height and a blocked off front grille. The blue paint and 17-inch alloys are unique to the BlueMotion range, too. It works well, and we think the changes make the car more stylish than a standard Passat.
Video: watch CarBuyer's video review of the VW Passat

[[{"type":"media","view_mode":"content_narrow","fid":"68640","attributes":{"alt":"","class":"media-image"}}]]
VW claims fuel economy of 68.9mpg – an improvement of nearly 5mpg over the old model – and CO2 emissions are down to 109g/km, which means road tax is free for a year and only £20 from there on in.
The impressive running costs are down to the BlueMotion’s improved aerodynamics, plus low rolling-resistance tyres, stop-start and brake energy recuperation. The systems work unnoticed, but the stop-start occasionally failed to operate when we had the air-conditioning on full blast.
Performance isn’t exactly blistering, with the 104bhp 1.6-litre TDI engine getting the BlueMotion from 0-62mph in 12.2 seconds. On the plus side, the engine is whisper-quiet for the most part, with noise only becoming unpleasant under heavy acceleration.
Much of the Passat’s appeal comes from its fantastic long-distance cruising ability, and the BlueMotion is no different. VW has done a great job of isolating the driver from rough roads, while bigger bumps are ironed out without fuss. But it’s this isolation that also detracts from the package somewhat. There’s very little involvement and the steering is short on feel. Anyone looking for fun would be better off with Ford’s Mondeo ECOnetic.
Thankfully, the cabin is a nice place in which to spend time. The dash is trimmed in a soft-touch material, and brushed aluminium inserts add a touch of class. The heater controls do feel slightly flimsy, though – unlike the switches found on Passat models which have optional automatic climate control.
Normally, eco specials carry a hefty premium over the standard car, but the BlueMotion is £20,285, which is just £260 more than a Passat S with the same engine. Buyers wanting the semi-auto DSG gearbox will have to look elsewhere in the range, though, as the BlueMotion only comes with a six-speed manual.
Share this on TwitterShare this on FacebookEmail