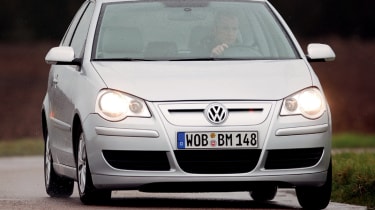 There’s a lot to like about the Polo Bluemotion. It offers up some neat ideas in an effort to combat the increasing fuel and financial restrictions faced by motorists. The combination of a realistic 60mpg, that torquey turbodiesel motor and good refinement makes it a genuine everyday proposition. However, the high initial purchase cost means that it would take years to reap the efficiency benefits. Add in necessary options such as air-conditioning, and you can’t help thinking you would be better off with a standard model.

The rising cost of motoring, not to mention fears over CO2 emissions, means car makers are being forced to think harder than ever about the kind of vehicles they are building.

Customers are demanding leaner and cleaner models which reduce bills and increase economy. So, VW is responding with a fresh line-up, badged Bluemotion. The German firm claims any motor bearing the nameplate will be the most efficient and environmentally friendly in the range – and it is out to prove this by applying the title to a new Polo.

The supermini is the first VW to get the Bluemotion treatment, and comes ahead of the equivalent Jetta and Passat. Modifications to engine, bodywork and transmission mean 70mpg is possible, while a CO2 figure of 102g/km beats even a Toyota Prius. Although the model is not due in the UK until the summer, we managed to get behind the wheel of the first car in the country, a left-hand-drive version, for an exclusive test.

Step up to the Polo and you’ll find the tweaks to the body are subtle. A faired-in grille, smaller mirrors and a rear window spoiler help the car slip easily and quietly through the air. Its special 14-inch alloy wheels are fitted with skinny, high-profile tyres which reduce rolling resistance.

Inside, the cabin seems to be standard baby Volkswagen at first glance. Look more closely, though, and you will notice some kit is missing. The air-conditioning has been ditched, as has electric operation for the door mirrors. Even the remote central locking is deleted. All this has been done to save weight and energy.

The 78bhp 1.4-litre diesel engine is based on the unit you can get in any Polo. However, a variable-geometry turbocharger and improved exhaust and catalytic converter make it cleaner than ever. It is hooked up to a five-speed manual transmission which boasts extra-long ratios – fifth gives 35mph for every 1,000rpm – to give economical running.

On the road, the tiny three-cylinder powerplant can be a little noisy under acceleration. But it has plenty of get-up-and-go and, with the 195Nm of torque available from 1,800rpm, it copes well with the tall ratios.

In fact, the combination of low wind noise, a long top gear and an absorbent ride makes the Polo an excellent motorway car. But when the going gets twisty, the narrow tyres and lifeless steering let the side down.

When it arrives in showrooms in right-hand drive later this year, the Bluemotion should be priced around £12,000. That’s about the same as the much better equipped Polo 1.4 TDI SE – a model which returns 63mpg. So, you’ll have to be sure that slightly lower fuel consumption and emissions are worth a little less luxury.