New plug-in hybrid Audi Q7 e-tron is quiet and comfortable, with loads of space and pace to match 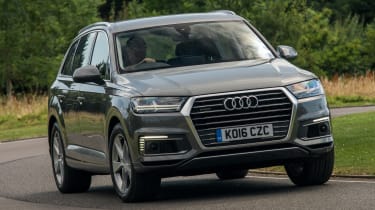 Quiet, comfortable and supremely relaxing to drive, the Audi Q7 e-tron does everything you could ask of a premium SUV. It’s capable of economy figures you would never associate with a car of this size a few years ago. It’s around £10,000 more than a regular Q7 diesel – and you’ll have to do without the third row of seats – but the Q7 e-tron is certainly top of the pile when it comes to plug-in hybrid SUVs.

Given the current trend for SUVs and buyers’ growing appetite for plug-in hybrids, the new Audi Q7 e-tron could be arriving in the UK at just the right time.

It’s Audi’s first SUV to get the e-tron treatment – pairing a 254bhp 3.0-litre V6 diesel engine with a powerful 94kW electric motor and an eight-speed automatic gearbox. It’s a powertrain that produces some very big and very impressive numbers – headline figures include (a claimed) 156.9mpg and 48g/km of CO2.

But economy hasn’t been maximized at the expense of performance, as the total output of 368bhp and 700Nm of torque enables the e-tron to cover 0-62mph in just 6.2 seconds. That’s faster than Golf GTI, but in a car that weighs almost twice as much.

Inevitably, then, you’d expect there to be a catch – but it’s not as major as you’d think. Upwards of 156mpg sounds ambitious, and in our experience it is – as over 42 miles of driving with the batteries fully charged we returned just shy of 70mpg. Having said that, you’ll do well to match that in either the Volvo XC90 T8 or BMW X5 xDrive40e as both come powered by thirstier and smaller 2.0-litre turbo petrols rather than a V6 diesel.

As is the case with all plug-in hybrids, regular access to a charging point to replenish the batteries is essential if you’re pursuing ultimate economy. Fail to do that and your combined mpg figure will drop to 36mpg as soon as the batteries run dry – about what you’d expect from a standard diesel model. Audi claims an all-electric range of 34 miles. 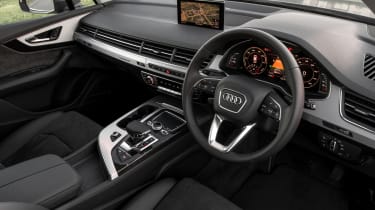 A standard Q7 majors on refinement and sophistication, with the part-electric e-tron building on those strengths. A gentle squeeze of the throttle will see you glide away in eerie silence, with those onboard perfectly cocooned from the outdoors. The Q7 – as always – has one of the finest interiors in the business.

Press on, and the V6 engine fires up. But it’s very well integrated and only detectable by a distant murmur front under the bonnet. Given the calm and cultured manner in which you can waft around in in pure EV mode, the e-tron’s quick turn of pace when you plant your right foot does take you by surprise. The big, smooth V6 and electric motor work together very effectively. 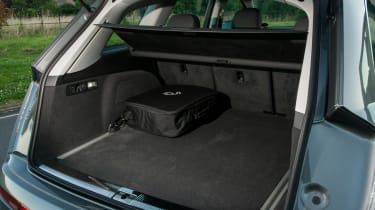 A downside of the bulky batteries in that while the standard car gets seven seats, the Q7 e-tron is a strict five-seater. Boot capacity also shrinks from 770 litres to 650 litres but its still more than spacious enough to swallow a family’s worth of luggage.

It’s easy to get carried away with the lengthy options list – our car had over £20,000 worth of extras fitted – but one worth putting your hand in your pocket for is the £2,000 adaptive air suspension. The Q7 e-tron is a very heavy car and the setup does a fine job of absorbing bumps and ruts, allowing the 2.5-tonne SUV to comfortably and silently waft along.