The BMW 7 Series' looks divide opinion, but the on-board technology is undeniably impressive

Can we avoid it any longer? The facelifted BMW 7 Series has a simply enormous, unmissable, chromed front grille. Styling is something we always discuss subjectively at Auto Express, but we’re willing to push the boat out here and mark the BMW’s card as slightly vulgar – much like the largest SUV in the range, the BMW X7. The side profile and rear of the brand’s limo hit the sweet spot though, with just the right mix of sportiness and sophistication.

If you’d prefer to bias the look in favour of the former, M Sport trim cars with angular, M car inspired bodykits and racy looking wheels are also available. Speaking of wheels, BMW offers a total of ten designs to choose from, ranging from 18-inch multispoke items as standard, to luxurious and sporty M Design 20-inch options.

Unlike the exterior, the cabin doesn’t change wholeheartedly with this facelift. But that’s no bad thing. The 7 Series interior still oozes quality both from a material and design standpoint, though it remains closely linked with the BMW 5 Series – an S-Class makes its flagship status known more obviously inside. 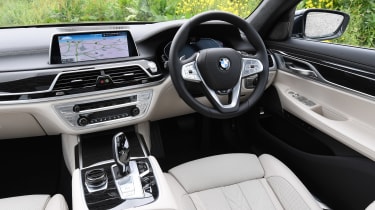 Spec a long wheelbase model and there’s a long list of fancy but expensive optional extras you can choose to turn the 7 Series into the ultimate mobile living space. Airline-style executive seats can recline up to 36 degrees, while a champagne chiller can be fitted in place of the middle seat.

The rear-seat entertainment system features two high-definition displays offering access to online services and movies, while on-board wifi allows you to stream or download directly from the web.

One of the most fascinating bits of tech is the gesture control technology, which allows drivers to control the stereo, answer incoming calls and set the navigation by simple hand gestures. It’s a feature no other luxury saloon currently offers.

New on the facelifted car is the fitment of a fully digital instrument panel as standard, while BMW’s iDrive infotainment system is still up there as class leading software. The central infotainment display sizes up at 10.2-inches, it’s bright, clear and a doddle to use either through touch input or the rotary dial placed near the gear selector.

Navigation, Wi-Fi, Apple CarPlay (no Android Auto sadly) and a live concierge service are all included as standard alongside a flood of telecommunication services, plus a great Harman Kardon audio system. An enhanced Bowers and WIlkins surround-sound setup can be found on the options list.