Ford has revealed the Mustang Mach-E GT Performance Edition. When the most extreme version of the brand’s all electric SUV goes on sale in summer 2021, it will target the Tesla Model Y with a 0-62mph time predicted to be in the region of 3.5 seconds.

That figure drops the Performance Edition’s 0-62mph time two tenths of a second below the standard Mach-E GT, and matches that of the Tesla. The improvement comes as a result of increasing the overall output of the twin electric motor configuration by 21bhp and 30Nm - now standing at 480bhp and 860Nm in total.

Ford is targeting a range of 235 miles on the American-standard EPA testing cycle - a measurement which is generally slightly more pessimistic than the WLTP figures.

To ensure that the most extreme version of the Mach-E can keep its performance in check, Ford has equipped the Performance Edition with stickier Pirelli tyres wrapped around 20-inch alloy wheels. They house Brembo brake discs measuring 19 inches at the front, and gripped by red calipers. Adaptive dampers are also standard.

At the other end of the Mach E scale, the entry-level rear-wheel drive Ford Mustang Mach-E is available to order in the UK now, with a starting price of £40,350. That figures means that, unlike competitors such as the Volvo XC40 P8 Recharge, it’s eligible for the Government’s £3,000 plug-in car grant. First deliveries for the base-model will arrive during spring 2021. 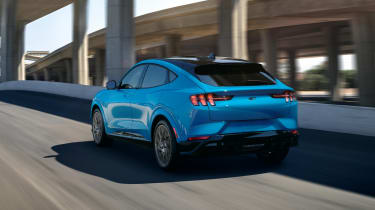 A long-range, rear-wheel drive model is also available. It has a starting price of £49,980 and features a 99kWh battery, which enables a range of 370 miles between charges – the most of the new Mustang Mach-e family, and significantly more than rivals like the Jaguar I-Pace. The standard-range model uses a smaller 76kWh battery for a range of 280 miles.

The entry-level standard range model has output of 254bhp and 415Nm of torque, which provides a 0–62mph time of eight seconds flat. However, thanks to the extra battery capacity on the extended range model, its power figure rises to 281bhp – although its torque figure and 0–62mph time is identical to the base model.

At 4.7 metres long, the Mustang Mach-E is slightly longer than the Jaguar I-Pace, and sports a similarly low and aggressive roofline. Despite this, there’s space in the cabin for five adults, while the SUV’s front and rear storage compartments offer a combined luggage capacity of more than 500 litres.

Its styling and layout have caused some contention with Mustang devotees – but they both fall into line with the current trend towards taller vehicles, and are required to accommodate the Mach-E’s battery pack mounted in the floor.

Murat Gueler, chief designer for Ford of Europe, said the firm is optimistic that doubters will be won over by the final shape. “We wanted to make this an EV with soul,” he told us. “The Mach-E is definitely inspired by Mustang, and that’s a vehicle that only Ford could do.”

The Mach-E’s profile is disguised by a thick extra roof section – shown in contrasting black paint on the car in our images – which fools the eye into thinking the SUV’s roofline is more coupé-like than it really is. It has a wheelbase of 2,984mm with relatively short overhangs, but its bonnet sticks out further than the Jaguar I-Pace’s.

Ford’s electric SUV also does without conventional door handles. Instead, there are buttons on the B- and C-pillars which pop the doors open. Rear passengers open their doors by pulling on the panel itself, while front-seat passengers get a small lip below the button which acts as a door-pull. The latter system was implemented after Ford’s research showed passengers felt uneasy putting their hands into the gap between the front and rear doors. 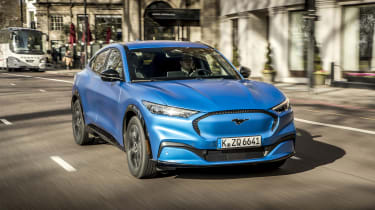 The car will be accessed via a smartphone key, which Ford says will be able to learn the user’s routines (such as the recurring time they arrive at the vehicle for their morning commute) and pop the door open automatically on their approach. There’s also a keypad in one of the B-pillars in case the driver’s smartphone battery is flat.

The Mach-E’s dashboard is dominated by an enormous 15.5-inch portrait touchscreen, which features an all-new interface. The system also uses a range of algorithms which use search data from your web browser or smartphone to suggest likely destinations or music – much like Google’s Android Auto system. It’ll also recognise the phone which was used to open the vehicle, offering tailored content to the user in question.

The touchscreen is used to operate a wide range of the vehicle’s features. Important, regularly accessed controls, such as the heating and ventilation system, persist at the bottom of the screen for easy access. There’s also a traditional rotary dial, which is neatly integrated into the centre of the display’s lower shroud.

Naturally, there’s a 10.2-inch digital instrument panel in place of a conventional analogue gauge cluster – although Ford has decided against fitting a head-up display. The fabric section along the top edge of the fascia hides a home stereo-style sound bar from Ford’s audio partner Bang & Olufsen. The storage bin at the bottom of the dash also houses a wireless smartphone charger and pair of USB connectors.

The new model is easily the most practical car to ever carry the Mustang name – and it’s set to be competitive in this area against many of its rivals. In addition to that 500-litre combined load space (split 100 litres in the front and the rest at the back), the rear seats can fold down to offer up 1,420 litres.

Murat Gueler has worked on a number of key projects at Ford, including the recently launched Puma. He gave us extra insight into the thought processes that led to a Mustang becoming Ford’s first EV.

Q: Was the Mustang always at the heart of the electric car that Ford’s ‘Project Edison’ was designed to produce?

A: “No, not at all. It was going in a completely different direction, in fact, and it wasn’t working out. It was a bit of a ‘eureka’ moment, at the end of 2016 or early in 2017, when we first started trying to inject some Mustang DNA into the project. When the first design popped up, it made the program. And it started us moving in a different way, because the principles that we had been working on couldn’t be applied on this car.”

Q: Purists are probably going to complain about the idea of a Mustang being an SUV, let alone one that runs purely on electricity. Are you prepared for a backlash?

A: “I don’t see this as an SUV, really. When you look at the side profile of the car, I don’t think it’s a conventional SUV at all; it’s really a crossover that incorporates inspiration from Mustang, hopefully without us going overboard with it.

“As for the purists, I’m sure there will be some who never change their mind about it, but we know from some customer clinics that others have come round to this idea quite quickly. 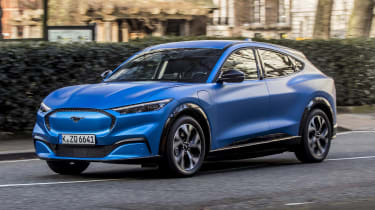 “After all, only Ford Motor Company can make a Mustang. And Mustang-inspired design gives us a unique point of view when approaching this kind of car.”

Q: What were the big challenges in making the Mustang EV in this format?

A: “There were a few areas we had to watch carefully. We worked very closely with the engineering team to make sure that we could deliver the right proportions for the car, because that’s the starting point. Then we focused on giving shape and muscle to it – but even then, it had to be carefully monitored. There is a lot of sculpture in this car but it’s well controlled, I think.”

Q: You’ve already confirmed a ‘GT’ Mach-E is on the way. Is there scope to make that car look more aggressive?

A: “For sure. We’ve said with this car that we’ve added some Mustang spice to it. There’s plenty of spice left that we can still add, I promise.”

What do you think of the new Ford Mustang Mach-E? Is it worthy of the nameplate? Let us know below… 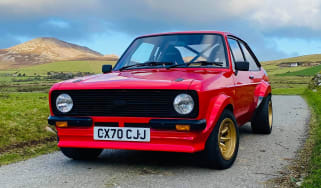 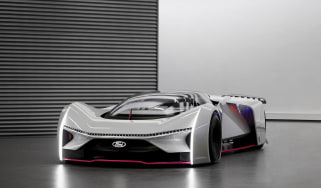