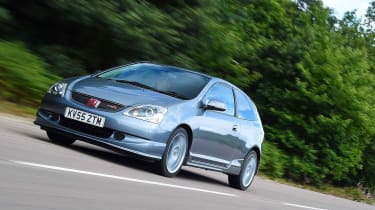 This was the model that really kick-started the Type R hysteria for Honda in the UK. Known internally as EP3 and built in Britain, the car was the first scorching Civic to be sold here officially, and it was a dynamic revelation next to the stodgy hot hatches launched at the start of the millennium.

Clever multi-link rear suspension delivered possibly the most adjustable front-wheel-drive chassis we’d seen, and with lovely balance and poise it gave you the confidence to wring out every last drop of performance. 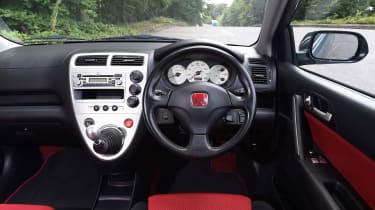 Honda’s naturally aspirated 2.0-litre four-cylinder VTEC served up 197bhp at a heady 7,400rpm, so you had to be prepared to thrash it if you wanted to go fast. Doing so was an addictive experience, rewarded with a glorious intake bark, and besides, keeping the revs high was no chore as the light and precise gearbox had a wonderful mechanical feel.

The EP3 Civic Type R may have been a bit short on torque, but with 0-62mph in 6.8 seconds and razor-sharp handling, it had the ability to keep many supercars on their toes along a twisty back road.