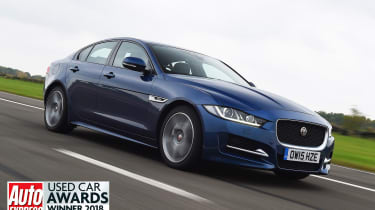 Used executive cars often represent a bargain. Given how many get sold new as fleet and company cars, there’s lots of choice on the second-hand market. Many models offer a premium driving experience when it comes to ride and handling as well as advanced interior tech, but at a heavily cut price thanks to often sizeable depreciation in the first few years.

Our Used Car of the Year for 2018, the Jaguar XE, conforms to this framework, so for all those reasons and more it’s a brilliant used buy. The XE is still right up there with the best cars in its class as a new model, and there have been only a handful of updates and changes over the few years it has been on sale, so used examples starting at around £12,000 are very tempting.

You can buy a 2015 car (the year the XE was launched) with fewer than 75,000 miles on the clock for that kind of money, but add more to your budget and you can get a higher-spec edition with an even lower mileage. 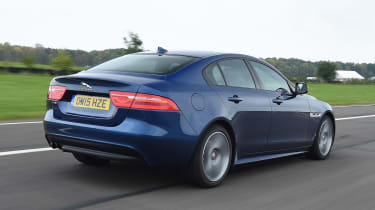 When the XE arrived three years ago it shot straight to the top of its class. We love the way it handles, with reassuringly weighty but responsive steering and an entertaining rear-wheel-drive chassis that’s linked to a punchy diesel engine and a smooth automatic transmission.

At the lower end of the market there’s a 160bhp 2.0-litre diesel engine, but if you spend about £14,000 you’ll get into a 177bhp model that’s basically just as economical. It’s this example that we’d go for, because CO2 emissions are respectable and the engine is frugal, so running costs will be low.

It’s not the most refined powertrain, but the Jaguar saloon rides and handles well.

The XE takes rougher roads in its stride with composure. Most bumps are soaked up by the suspension with a minimum of fuss and fairly smooth damping. Bear in mind that a three-year-old example shouldn’t be any different, so steer clear of tired-feeling cars. Only the harshest potholes cause a problem. The driving position is brilliant and cements you in position to capitalise on the chassis’ ability, while the wraparound dash creates a driver-focused feel inside. 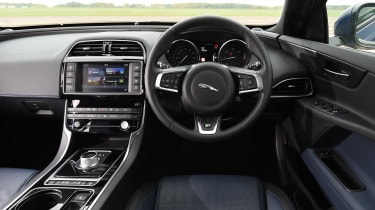 Then there’s the XE’s usability, passenger and luggage space, as well as the balance of economy and performance from its diesel engines. If you’re looking for a family car that will be comfortable, efficient but also fun to drive – and with a badge that serves up prestige at an incredibly affordable price – look no further than a used Jaguar XE.

The Jaguar XE offers a fine blend of performance, economy, space and practicality at a fantastic price.

On the road: A punchy diesel engine and smooth auto transmission are complemented by handling that we love.