The Evoque is more practical than before, but it’s still a bit cramped in the rear 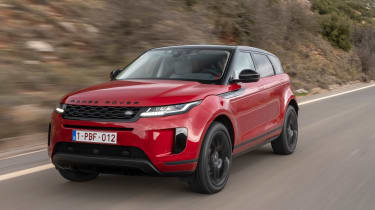 The Range Rover Evoque may look much like the old car to the untrained eye, but with just a few Velar-inspired tweaks a near decade-old design has been brought right up-to-date. The car has a longer wheelbase than before to try to free up some more rear passenger space, but that sloping roofline still poses an issue for taller occupants.

In the front, a good driving position is easily found – eight-way heated manually-adjustable seats are standard on entry-level models, while S, SE and HSE cars include further power-adjustable seats with a memory function for the SE and HSE versions.

Rearward visibility isn’t fantastic thanks to that narrow rear window and slim glasshouse, but the optional ClearSight rear-view mirror (£515, standard on R-Dynamic HSE and Autobiography) helps solve this issue. It uses a roof-mounted camera to display an uninterrupted, widescreen view of the road behind or – at the push of a button – can be returned to a conventional mirror.

There are four generously sized storage bins, a large cubby under the centre front armrest and a useful rubberised tray on the centre console that’ll happily store a phone or wallet – cupholders are located beneath this. 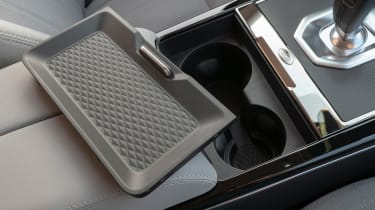 The Range Rover Evoque measures in at just under 1.65m tall, 4.37m long and a few milimetres over 1.9m wide - or 2.1m including mirrors. For comparison, the Volvo XC40 is a few millimetres taller and longer, but a shade narrower at 2.03m including mirrors.

The BMW X2 is lower, measuring just over 1.52m tall, but almost the exact length and width of the Evoque - 4.36m and just under 2.1m including mirrors, respectively.

There’s enough space in the Evoque to sit one six-footer behind another, but despite a small increase in leg room over the original car, the rear-seat occupant will still feel a little hemmed-in.

Longer journeys may become uncomfortable for adults in the rear as a result; sitting three-abreast will also prove pretty cosy as the car tapers towards its rear. The sloping roofline will annoy anyone much over six feet tall. Rivals like the Volvo XC40 and Audi Q3 make a much better job of rear-seat packaging. 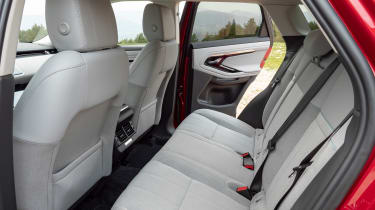 The Evoque’s boot is up 10 per cent in size versus the outgoing car. There’s 591 litres on offer with the seats up, but this is probably measured floor-to-ceiling; rival’s figures seem small on paper by comparison, but the difference is not as drastic in actual use. For example, BMW quotes 470 litres for the X2 and Lexus 475 litres for its NX.

Fold the seats down and there’s 1,383 litres of space to play with. The rear seats folds on a 40:20:40 split - this can be done via a handle in the boot. In true Land Rover tradition, there’s a huge selection of practicality-boosting accessories to add – including seat-back stowage, a rubber mat for the boot and a rear bumper protection cover for when loading. 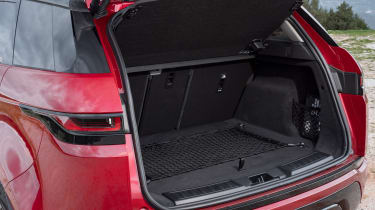 The Evoque lives up to its badge when it comes to towing. There’s a choice of an electrically deployable tow bar for £1,035 or a detachable item for £715; Land Rover’s Advanced Tow Assist (which can only be had in combination with certain options) costs £365, which helps demystify the dark art of reversing a trailer using the rear view camera.

All Evoque models can tow an unbraked trailer of up to 750kg; choose an automatic gearbox and diesel engine combination and there’s up to 2000kg of braked trailer towing ability. The entry level diesel with two-wheel drive and a manual gearbox is limited to 1,600kg braked trailers. Maximum towball weight across the range is 100kg.