Everything you need to know about Skoda's approved used scheme 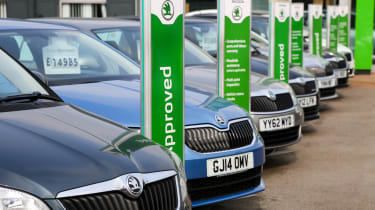 There are more than 5,000 used Skodas to choose from through its approved scheme. In theory, all models are less than six years old and the mileage cap on them is 72,000 miles, although we found one car with over 90,000 miles, along with several first registered in 2009. Either way, as long as the model is sold through the scheme there’s a 12-month warranty, as well as a 30-day or 1,000-mile exchange option.

Something that Skoda promotes more than most rivals is its finance options. If you want to buy an approved used car that’s less than 12 months old,  you can do so through a Solutions Personal Contract Plan. Cars aged between one and five years old aren’t available on a PCP, but they can be bought on finance (at 7.9 per cent APR). However you buy, your approved used Skoda will come with a year’s breakdown cover and its first two services are fixed at £139 apiece if they’re performed by an official franchised dealer.