Prices for the Suzuki Vitara start from around £21,000, which is a little high for the small crossover class, while the most expensive 4WD version weighs in at around £25,000.

Because it weighs relatively little (around 1,200kg), the Vitara’s running costs should be among the lowest in the class. Under WLTP testing, CO2 emissions start at 128g/km and rise to 140g/km if you add four-wheel-drive. This equates to a benefit-in-kind rate of 28% for company car drivers, rising to 31% if you opt for a 4x4 model.

These emissions will affect the first year of road tax as part of the Vitara's list price, but as all cars are well below the £40k road tax surcharge limit, it'll cost £150 a year in road tax from year two onwards.

Fuel economy reaches a claimed maximum 49.7mpg on the combined cycle, while the SZ5 4x4 version is not quite so efficient, delivering 45.4mpg. 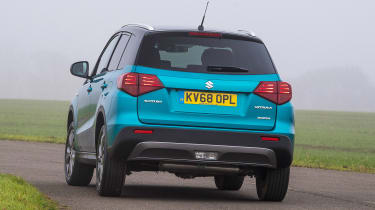 All Vitara models sit in insurance groups 21 or 22, so premiums shouldn't be too expensive.

By fitting even the entry-level models with air-conditioning, Bluetooth, DAB radio and alloys, Suzuki is working hard to improve residual values for when you sell the car on a few years down the line.

The Vitara’s new ‘crossover’ style is more desirable too, so you can expect the car to hold on to more of its original value than the old-school Grand Vitara over the course of three years. Values are in the region of 39-46%, with the entry level car the best of the bunch.