How much does it cost to charge an electric car?

There's a lot of confusion around the cost of charging an electric car. Here are the facts... 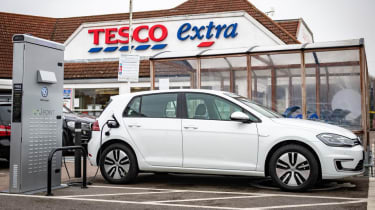 Unlike with petrol or diesel cars when you only have the forecourt fuel price to consider, there are lots of variables when it comes to the cost of charging an electric car or plug-in hybrid. When you charge an electric car at home or at a public charging station, the cost can fluctuate depending on when you charge, which tarif or charging network you use, how big the battery is and how much energy you need.

At home, you can use a three-pin plug or a faster wallbox. The first comes with no installation costs because you’ll have existing sockets in your house, but since a car takes several hours to charge, it’s best done overnight. Electricity costs 14p per kWh on average. So, you’d pay £6 for a 13-hour charge on a 40kWh Nissan Leaf at a 3kW charger. However, as electricity costs less off-peak (e.g. at night), the charge is more likely to be £4.

A typical wallbox home-charging unit can supply power between 3 and 22kW. You’ll need to pay to install one, but a government grant will fund up to 75 per cent of the cost of purchase, up to £350. A 7kW home charger cuts the charge time significantly, with little change in the cost of power.

The cost of using public charging stations varies, but we’ll take Polar, one of the largest providers of such stations, as an example.

Your first option is a Polar Plus subscription at £7.85 a month (although new joiners get the first three months free). Polar chargepoints, and even most others outside the Polar network, are free to plug in to, with the charge rate itself usually from 9p per kWh.

Alternatively, Polar Instant is a pay-as-you-go service. All points have an admin fee of £1.20, and it costs from £6 for 30 minutes at a rapid charger, to £1 an hour at a 3kW slow charger.

On the motorway, you’ll likely find Ecotricity charging stations. Ecotricity customers pay 15p per kWh, but the charge is double if you have no Ecotricity account. At a 50kW rapid charger, a full charge of a 40kWh Leaf costs £12 – more than at home, but it’ll be done in less than 50 minutes.

How does a petrol vehicle compare?

Over a year and 9,000 miles, an electric vehicle can cost far less than the petrol equivalent. In that time, a petrol model with average economy of 45mpg will cost £1,209 in fuel. Over the same period, a 40kWh electric car with a real-world range of 168 miles would cost £300.

You can save even more with solar panels linked to your home wallbox to generate and store electricity.

Check out the list of the best electric car chargepoint providers in the UK...