Can the stunning mid-engined Alpine A110 deliver a driving experience to match its looks?

After a brief first encounter, it’s clear the new Alpine A110 does exactly what you expect from a mid-engined sports car. Yes, rivals like the Audi TT are more usable, but the French sports car offers more fun than a Mazda MX-5 can even dream of. Furthermore, it shows where the Alfa Romeo 4C so desperately missed the mark. That car was so extreme that it became unpleasant in daily use, but the Alpine does the reverse; it’s comfortable, yet it provides thrills when you ask for them.

In 2016, Renault boss Carlos Ghosn unveiled the resurrected Alpine brand’s first concept car. The A110 resembled its sixties namesake, just like BMW’s MINI took inspiration from the original. But this wasn’t a nod to the classic, it was a complete revival.

With rear-wheel drive, a mid-engined layout and a kerbweight less than 1,000kg, the Alpine possessed the ingredients of a great sports car. More than a year later, the production version appeared, with a 249bhp 1.8-litre turbo engine and seven-speed auto gearbox. And now we’ve driven it.

Tipping the scales at 1,103kg, it was clear that the earlier target could only have been achieved by using carbon fibre. That would’ve made the car too pricey, so aluminium is now used, but the A110 still feels light. 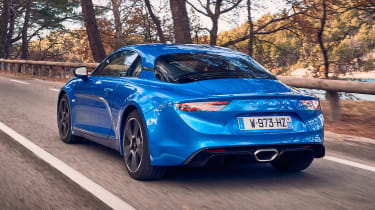 The new coupe looks compact. In order to maintain the lines of the original, there’s no rear spoiler, so downforce is provided by a large diffuser instead. Above this is a tiny 100-litre boot, while at the front there’s another, similarly stingy storage area: this is a sports car, after all.

Open the door, and it feels peculiarly light, almost as if you were getting into a classic car. But Renault has done well to create the right mix of austerity and luxury inside – the thin strip of stitched leather that’s used as a door pull is a particularly pleasing detail.

The cockpit is compact, of course, but taller adults can sit comfortably without issue. Optional sports seats give excellent support but aren’t too firm, while the raised centre console houses the buttons for the gearbox, as well as a sizeable starter button. 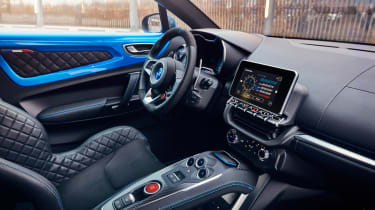 A set of digital dials are used, and they can change appearance according to driving mode: Sport, Neutral or Track. The gearbox, throttle response, steering and exhaust note can all be tweaked, while the ESP can be switched off completely, too. Shift paddles are attached to the steering column rather than the wheel, but they are big enough to operate with the steering on part-lock.

The Alpine will be built in Dieppe, where Renault’s RS models are manufactured. This is no coincidence, as the same team developed the A110. Given our experience of the last Megane RS, expectations are high.

Thankfully, the driving experience satisfies in almost every area. The steering is light and precise, with loads of feedback, while understeer announces itself well in advance. If you want to play around with the back end, the Alpine will slip and slide with the best of them. However, if you back off sharply when all the systems are switched off, the coupe will induce a spin. 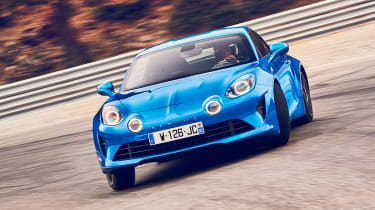 The turning circle is small, while the Alpine’s compact dimensions mean it can put its stamp on roads that are too narrow for other sports cars. While the presence of an auto box was a concern at launch, it’s far better than the transmission in the Clio RS. It responds quickly and crisply, and the shifts are punchy in the sportier drive modes.

The engine is a peach, too. It rumbles away in the background with occasional hisses from the turbo behind your head. Putting your foot down results in a pleasant howl, although that may be down to the optional sport exhaust. There is some turbo lag, but it feels as though there’s power to spare.

Maximum torque is available from 2,000rpm. That’s good for a burst of acceleration, but it does mean you often have to change up sooner than you’d like. However, with 249bhp, the A110 is more than fast enough – and it could even trouble the Porsche 718 Cayman for performance.