BMW has impressively given its diesels small car efficiency despite big engine acceleration, although the petrols can be thirsty 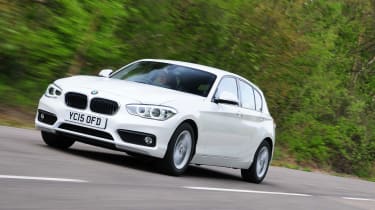 The 1 Series is BMW's entry-level model, so it isn't surprising that it's one of the cheapest cars in the range to run after the headline-grabbing electric i3. The 116d is incredibly efficient, although the on-paper figures have changed slightly under the WLTP test procedure. Under the old NEDC cycle, it returned 83.1mpg and 89g/km of CO2 (so cars registered before 1 April 2017 qualify for free road tax). But now it records up to 53.3mpg, with emissions of 111g/km on the smallest wheels.

Stop-start technology is standard across the 1 Series range, but we'd suggest sticking with the diesel models if out-and-out fuel economy is a priority. They offer a great balance of performance and value.

To help keep fuel use down, all 1 Series models get ECO PRO mode that encourages more economical driving by reducing throttle response and the amount of load put on the engine by equipment such as air-con.

If you prefer the character of a petrol engine, or you do especially low mileage, the 118i petrol engine returns up to 38.7mpg on the WLTP test and emits 136g/km of CO2, which is very impressive given its performance.

Overall the diesels stack up much better in the consumption stakes. The 118d returns 52.3mpg, while the 120d manages up to 49.6mpg. Emissions for these two are 115g/km and 120g/km respectively, although these rise with the addition of bigger wheels. 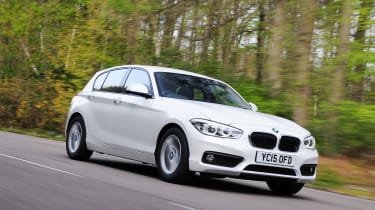 The 120i is, as you’d expect, less efficient than the equivalent diesel, but it's still not too bad given the performance on offer. It returns up to 37.2mpg, meaning late 30s in reality, while the 32.5mpg M140i isn’t a car to choose if efficiency is your priority. With all of these models, choosing the five-door over the three-door doesn't have an impact on efficiency.

To help keep long-term running costs down, BMW offers a range of cost-effective fixed-price servicing and competitive finance deals. These should help keep repair costs to a minimum in the first five years of ownership.

Insurance groups begin at 15 for the 116d, which is very low for something with a BMW badge on the front – and the group 18 118i looks similarly good value given the performance.

Naturally, moving up the range means bigger costs because of the desirability, higher performance and rear-wheel-drive chassis, which can prove more troublesome for less experienced drivers in more powerful versions. A 120d sits in group 24 and the M140i is placed way up in group 37 – by comparison, the 296bhp, four-wheel drive Volkswagen Golf R is group 29.

The BMW badge and relative rarity in the segment mean the 1 Series doesn’t depreciate as heavily as most of its family hatchback rivals, but particularly those like the Ford Focus and Vauxhall Astra. However, with a new model in showrooms, and the 1 Series' relative age when compared to newer rivals, depreciation has hit harder in recent years, with residual values in the region of 35-42 per cent. The M140i remains a desirable model at the top of the range, but the rest of the line-up dips below the 40 per cent mark. 5-door cars have marginally better residuals than the 3-door versions.