The Fiesta isn’t just spacious - it’s practical in the sense that it’s easy to drive, and the driving position is excellent. It’s not just for the average person, though, as the amount of adjustment in the wheel and seat means taller and shorter drivers will be able to get comfortable.

Visibility is good, apart from the small rear window and thick C-pillars. Parking sensors or a rear-view camera are offered on all but the base Trend versions, which some will find very helpful.

That makes it a little thinner than a Nissan Micra, but it is longer and taller and has a longer wheelbase. However it’s only by a matter of millimetres and most cars in this class are pretty much the same size on the outside; it’s the inside that really sets each model apart.

Ford says there’s an extra 16mm of legroom in the back of the new Fiesta, and it does feel a little bit more spacious than before. It’s not as cavernous as a Suzuki Baleno or Honda Jazz in the back, but there’s more than enough leg and headroom even for taller adults in the back seats. The seating position in the back is a little bit too upright for total comfort, but for the kind of journeys buyers will use it for that won’t be a problem. 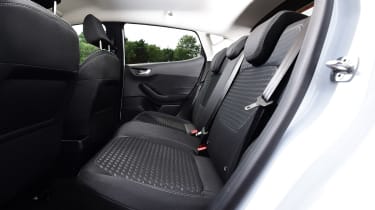 In the front there’s lots of space and both driver and passenger will be able to get comfortable thanks to the amount of adjustment offered in the seats.

The Ford Fiesta is now available with 311 litres of luggage space with the seats up, and 1,093 litres with the rear seats folded down - a little more competitive, but not by much, as most cars in this class have a boot of a similar size.

The boot opening is wider than before too, which makes getting big items in and out easier. The loading lip is still quite high up, which hinders sliding in long items. However, for £75 you can add a variable boot floor, which can be raised to create a flat load area with the rear bench folded.