The biggest model in the American firm's range has been given a facelift. 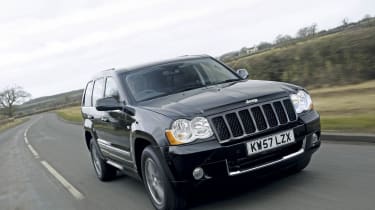 Sometimes it doesn’t take a full redesign to make tangible improvements to a new car. Jeep was aware that it was the interior that was letting the Grand Cherokee down, and has made some sensible alterations to help boost it. But more extensive changes are required under the skin if it is to tempt buyers away from Land Rover’s Discovery. Still, the largest model in the US firm’s range remains an SUV not afraid to stand out from the crowd.

What does Jeep mean to you? To some, the famous US brand goes hand-in-hand with hardcore off-roading. But to many, flimsy reliability and flaky interiors spring to mind.

Having recently split from partner company Daimler, Jeep’s parent firm Chrysler is setting about boosting the premium feel of all its flagship models. In Issue 1,003, we were impressed by the company’s facelifted 300C, and Jeep designers have pulled a similar trick with the Grand Cherokee.

On sale in the UK now, the 4x4 has received several tweaks to keep it competitive in a tough market, but have the changes gone far enough?

From the front, it will take a keen eye to spot the differences. The biggest modification has been made to the shape of the headlamps – the twin bubble at the top of the lights is now reflected at the bottom. The trademark Jeep grille has also been altered to help emphasise the Grand Cherokee’s muscular looks.

With the same shallow glass area and relatively low roof, the biggest 4x4 in the Jeep range is still a stylish mud-plugger, but it’s inside that it has always trailed Land Rover rivals.

The first thing that’s obvious when climbing in is that the new model is no more practical than its predecessor. That means little more space than you will find in a family hatchback.

What designers have managed to do is to give the Jeep a more upmarket feel. Light-coloured plastics on the dash and fake-looking wood have been replaced by darker trim and black surfaces. Much of the switchgear is still lacking in quality, but the overall ambiance has improved.

It’s a shame engineers weren’t able to give the Grand Cherokee a similar makeover under the skin. With no mechanical changes, the Jeep will still struggle to match the dynamic abilities of many rivals.

Despite impressing off-road, it can’t match the Land Rover Discovery for ride quality, but at least the six-cylinder engine offers strong performance and superb refinement.

The Grand Cherokee is available from a competitive £26,995 in base trim, while the luxurious Overland model pictured here weighs in at £35,595, yet comes with everything from xenon lamps to a reversing camera. It’s still not a class leader, but it now has more to offer than ever.

RIVAL: Land Rover Discovery Celebrating a second place finish in Driver Power 2008, the Discovery has proved to be reliable and desirable – but costs much more if you want all the luxuries.