The Niro is as simple to drive as any other automatic, but it's not very interesting to drive 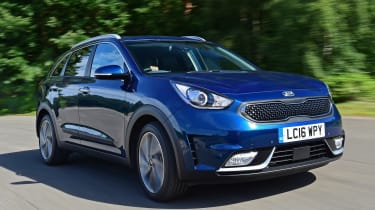 Kia has tried to make the Niro as normal to drive as it is to look at, but as in all hybrid models, there’s eerie silence when you twist the key in the ignition. Slot the gear selector into Drive, squeeze the throttle and the car glides forward on electric power alone. Pick the plug-in version and you can continue for up to 36 miles without using the petrol engine at all.

However, stick with the standard Niro hybrid and you'll find it harder to stick in EV mode. You don't have to press the pedal particularly hard for the 104bhp 1.6-litre four-cylinder petrol engine to burst into life to assist the 43bhp electric motor. The internal combustion engine is more intrusive when compared to a Toyota Prius’s, particularly at high revs, when it takes on a coarse note and sends tingly vibrations through the car. The Niro also doesn’t accelerate with the same smooth and seamless action as the Toyota. 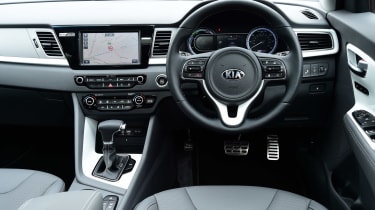 That’s partly down to the car’s six-speed twin-clutch gearbox, which delivers slightly lazy and jerky upshifts. Even so, once up to speed, the Niro will cruise for short periods up to 70mph on battery power alone - the on-board displays can be set to show you how power is being managed between the battery, electric motor, engine and the road. Yet while the Niro’s powerplant can’t match a Toyota’s for smoothness and refinement, it has the upper hand for performance. With a combined output of 141bhp, the Kia has a 20bhp advantage over a Prius, plus there’s a muscular 264Nm of torque available for short periods.

As a result, we tested a Niro over the 0-60mph sprint in a brisk 9.2 seconds, which was 1.1 seconds faster than the time we recorded in a Prius. It also beat its rival in our kickdown assessments, while its ability to hold gears allowed it to record better in-gear acceleration times, which were on par with traditional 1.6-litre diesel models.

However, in the real world, you have to work the Niro’s power unit hard to maintain the same pace as the more relaxing Toyota. Plus, the stiff suspension set-up results in the Kia following bumps at lower speeds and fidgeting on the motorway. The plug-in version is said to be even quicker, though in reality it feels pretty evenly matched with the standard hybrid model.

The Niro can’t match a Prius for driver involvement, which is something we never thought we'd say about a Prius, but the Kia's steering is direct and the handling is safe and predictable. Selecting Sport mode sharpens the throttle response, delivers a more aggressive shift strategy for the gearbox and adds weight to the steering, although it’s all rather at odds with the car’s otherwise sensible character.

The hybrid Niro's 1.6 direct-injection petrol engine is smooth, but it does cut in more frequently than a Toyota Prius's. It comes with a six-speed DCT twin-clutch gearbox, and while that sounds more appealing than Toyota's CVT gearbox, it actually behaves quite similarly, as it holds on to the revs when accelerating, so it sounds rather harsh, while the shifts themselves are clunky.

The only other Niro engine option is the PHEV plug-in hybrid, which uses a larger capacity battery for a greater all-electric range. Performance is still a bit sluggish, however, courtesy of the extra 84kg its battery pack weighs, so it doesn't feel any faster than the conventional Niro on the road.